President Donald Trump and two Republican senators have unveiled a plan to cut the number of legal immigrants to the United States in half, and favor newcomers who speak English. Video: REUTERS 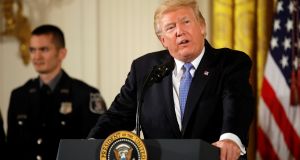 Donald Trump has backed a plan to reduce legal immigration to the US. Photograph: Carlos Barria/Reuters

The Irish should reject a plan by US president Donald Trump to prioritise high-skilled, English-speaking immigrants because it is “racist”, a leading Irish-American immigration campaigner has said.

Former Democratic congressman Bruce Morrison urged supporters of Irish immigration into the US not to embrace the plan, unveiled yesterday, to cut the number of legal, permanent immigrants by shifting from a family-based to a skills-based green card system.

It was rooted in an “us versus them” mentality and had “race at its core”, Mr Morrison said.

“I don’t think that the Irish would be wise to grasp the racist, nativist approach as a good thing for the Irish,” said the US immigration lawyer responsible for tens of thousands of “Morrison visas” being issued in the 1990s, including 48,000 for the Irish.

Mr Trump backed legislation introduced by two Republican senators that aims to reduce the number of legal immigrants by replacing the “low-skilled” system with a “points-based system” for skilled workers.

“This competitive application process will favour applicants who can speak English, financially support themselves and their families, and demonstrate skills that will contribute to our economy,” Mr Trump said.

Fulfilling a long-promised vow to curb legal immigration, Mr Trump said it would benefit the American worker by reducing the number of low-paid, foreign workers and raising wages.

Mr Morrison said the legislation had no chance of passing Congress and was “just PR” for Mr Trump to play to his supporters.

Irish immigration lawyer Deirdre O’Brien said the “devil will definitely be in the detail” on whether it would benefit skilled, educated Irish workers. “I don’t see that they can chuck out one system and bring in another. It is too heavily layered with procedure,” she said.