What I learned about taking my kids on holiday 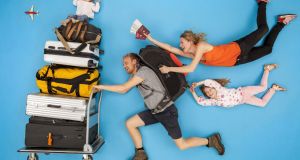 Next year, it’s back to checking a suitcase like we’re living in the 1800s, heading on a steamship to the new world where you might die of consumption mid-voyage.

Holiday. noun. An extended period of leisure and recreation.

“Those who do not learn from the past are doomed to repeat it” - George Santayana, 1910.

I’m a great believer in “getting it right next time”. It’s almost impossible to achieve a flawless victory on the first try, but you learn from your mistakes and hone your skills so that the next time you’re faced with the situation, you work smarter, not harder.

As such, having spent two full weeks with my wife and our young kids on a family holiday, here are some tips that I will carry over to next year’s trip, so that it doesn’t consist solely of me repeating the word “don’t” for a fortnight.

Pack it all
Next holiday we go on, we’re packing the entire house.

Before kids, I had my packing game perfected; everything I needed all sat neatly in a single carry-on case, allowing me to coast up to the airport with minutes to spare and casually stroll to my gate. I tried to apply this logic to our trip this summer, and arrived at our destination woefully underprepared for a “relaxing time”.

So next year, it’s back to checking a suitcase like we’re living in the 1800s, heading on a steamship to the new world where you might die of consumption mid-voyage. Forget packing light; each child will require at least three changes of clothes per day depending on their age and skill with an ice-cream, and that’s before you include the toys and blankies and iPads pre-loaded with their favourite shows and movies to avoid a fit because the hotel telly is playing Blaze & The Monster Machines in Spanish.

Bring suntan lotions (because they cost a fortune when you get there) pool inflatables (same), nappies, cotton buds, Calpol… everything is required, because you really don’t want to have to try to explain a strawberry flavoured magic syrup that cures everything to a pharmacist who doesn’t share your language or sense of urgency.

Please step through
Next year, we’ll be better prepared for the security check in the airport, having learned that it isn’t the simple stroll-through that it was before we had kids.

With small children, you need to do drills every night for the previous week, running your kids through the doorway from the sitting room into the hall to get them ready for the real deal. You need to make a plan and put it in a little rhyme so that everyone knows where they are and what they’re supposed to be doing, like in the Dirty Dozen.

“One, all tablets and phones are done. Two, Mamma goes through. Three, fold the buggy. Four, kids go through the magic door. Five, the buggy arrives. Six, Dadda joins the mix.”

Of course, like all good second World War men-on-a-mission movies, there’s always something that throws the entire plan into dissaray, like a jacket that you left in the buggy that must be taken out and re-scanned, or a child that just barrels past their waiting parent and must be chased, leaving the other shoeless parent stranded with five trays of keys and passports and wallets to contend with while the rest of the line tuts at them. These are things that can only be learned the hard way, but by God we’ll nail it next time.

Up up and oh no
Most parents already know how their children are on planes; if you don’t, then just take your kids on a plane, and you won’t be long finding out.

If I could give you one piece of advice, it’s this; pack spare clothes in your carry-on luggage. Even something light, like pyjamas for the kids, and a spare T-shirt and shorts for yourself. I say this as a man whose daughter turned our entire row on the plane into Noel’s House Party right as we lifted off this year, forcing the two of us to sit in milky sick until the pilot had levelled off, at which time the cabin crew brought us to the front of the plane while they tidied up dressed in hazmat gear (I’m not kidding, they had visors and everything).

We then spent the next four hours getting smellier and smellier in our damp clothes, much to the ire of the passengers around us. Lesson learned for next year; bring spare clothes. You’ll still be regarded at “the vomit parent” by the rest of the plane, but at least you won’t smell like it.

There’s no running in slow motion on the beach, each family member dressed in flowing white, there’s no loving moment where dad tosses his son up into the air as Solsbury Hill plays somewhere.

What there is, is work.

Work such as getting to the hotel or villa or apartment or Airbnb or concrete pipe in the underpass of a motorway or wherever it is you’re staying, arguing with the kids over who sleeps where, arguing with the hotel staff because the travel cot provided for the littlest child is actually the kind of thing that was taken off the market in the 80s due to serious health and safety concerns, before making yourself a funny-tasting cup of tea with a kettle that doesn’t really boil the water.

Work, such as maintaining a constant state of vigilance as your kids play at the swimming pool. My kids love a swimming pool; they love paddling, they love splashing, and as much as they can manage it, they love swimming. But what they love more than anything else, is teetering.

Teetering along the edge of the water, unwilling to get in, but also unwilling to get the hell away from it. Do you want to get in, I’d ask my little man. Come on, I’ll get in with you. But no, all he wants to do is walk the perimeter of the pool, along the thick white tile that separates the terracotta patio from the water. That’s it; just walk a lap of the pool, right on the edge, while I watch him more tensely than I watched the last episode of Breaking Bad, while remembering the baffling instruction that my wife left me with;

Relax, but not to the point of being relaxed. If you find yourself getting too relaxed, snap yourself out of it. So that’s how I spent this year’s holiday; incredibly conscious of the fact that I may be about to get the wrong amount of relaxed.

Next year, I’ll know in advance not to expect relaxation, and I truly believe the trip will be all the better for it.

See the sights
Here’s a thing I learned for next year; kids have no interest in “the old town”. They don’t care about a wonderful coastal walk that really shows off the stunning landscape of whatever country you’re in. And they definitely don’t want to go “somewhere nice” for lunch.

What kids love is the beach, where suntan lotion and sand can mix together to create a very special irritant that you must re-apply at 45-minute intervals as they whine about wanting to get back to digging “the biggest hole”.

Kids love markets, where they can spend their pocket money on easily-broken but incredibly shrill plastic toys, or over-sized teddy bears that you did not factor into the luggage equation, which will make the return flight even more cumbersome than it was already shaping up to be.

And kids love other kids; kids they meet in the hotel, kids they meet in kids clubs, kids that they meet by the pool. It doesn’t matter that there’s a language barrier between your kids and the kids three doors over; they don’t need language, they speak child. I spent two weeks watching my son play with a little German boy without a shared word between them, which would have been really sweet if I hadn’t been involved in a bitter dispute about leaving towels on sun loungers with the kid’s Dad for the whole holiday.

The time of their lives
When arriving back home with the family it’s easy to say that next year, well, next year maybe we just won’t go through this hassle again, as the trip was less like a holiday and more like something you’d be sentenced to doing if you were caught selling state secrets.

But that’s when you remember the time your kids spent playing in glee with friends that they may never see again but will remember forever.

The odd stolen hour where your partner looked after the kids and let you head down to the hotel bar where you sipped a well-deserved beverage and sat there with the rest of the parents, using the bar’s WiFi on your tablet which has a rubber cover that makes it look like it has legs and arms.

That one nice lunch you had in a restaurant that wasn’t just a McDonalds spelled with an umlaut.

Holidays with kids may require more planning than D-Day and involve just about as much screaming on a beach, but they truly are a precious luxury that you will remember fondly when you get back home.

I stress, when you get home. You’ve got the whole packing and travel thing to do all over again before then. You’ve learned from the mistakes of the departing flight, so you can make the return a lot smoother, and the same goes for next year’s jaunt.