A lifeline to nature in Dublin city

Biodiversity is all around us. Lifeline, a new nature corridor, aims to help us spot it 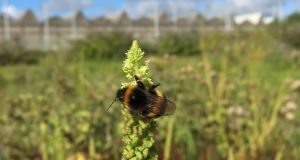 Wild Dublin: a bumblebee collects nectar from weld next to the Royal Canal at Broombridge, near the new Luas terminus. Photograph: Kaethe Burt-O’Dea

You ate that first one and its flesh was sweet
Like thickened wine: summer’s blood was in it
Leaving stains upon the tongue and lust for
Picking.

Seamus Heaney’s early poem Blackberry-Picking vividly captures one of August’s quintessential outdoor pleasures. When we read it most of us probably picture a more or less remote rural scene. Yet you can find a rich crop of blackberries, straight off the bushes, in Dublin’s north inner city, beside the Royal Canal, within sight of the new Luas line to Broombridge.

We tend to think that wild plants and wild animals are to be found only somewhere “out there”, beyond the city limits. But if we refocus our senses, and recalibrate our expectations, we may find magical and delightful expressions of nature wherever we are.

“The first step is simple,” a pamphlet produced by NatureRx tells us. “Open your front door, look around you, and observe the biodiversity that exists around us.”

The best way to get your head around what the Lifeline might become is to visit the Bí Urban shop, where design students from DIT have created prototypes

NatureRx, an arts project in which anyone can participate, aims to be a catalyst for an ambitious “Lifeline nature corridor” from Broombridge and Glasnevin through Phibsborough, Blessington Basin, Grangegorman and Stoneybatter to the National Museum of Ireland at Collins Barracks.

The new Luas line and expanding Dublin Institute of Technology campus are already radically reshaping this area. The project invites local residents to follow part or all of a roughly mapped route, and document their observations, in a medium of their choice. Their contributions will inform the creation of a green infrastructure, “re-wilding natural areas to support our pollinators, linking inspiring buildings and connecting communities”.

The project also aims to stimulate innovative models of healthcare – the Rx in the title is medical shorthand for “prescription”, and refers to the mounting evidence that interaction with nature benefits physical and mental health.

NatureRx, which is funded by Grangegorman Development Agency’s Percentage for Art scheme, is the brainchild of Kaethe Burt-O’Dea’s Bí Urban project, which seeks, among many other things, “to make better urban planning happen through public engagement”.

She was originally inspired by New York’s iconic High Line, a linear park on a former railway, and envisaged the route along the old Broadstone line. But as that has been occupied by the Luas the idea has taken on a much broader, attractively meandering shape.

The best way to get your head around what the Lifeline might become is to visit the Bí Urban shop, in Stoneybatter in Dublin, where design students from DIT have created prototypes for NatureRx for public display. The hope is that their very individual reflections on responses to nature along the route will trigger others to go out and do likewise.

The medium chosen by their teacher, Ben Readman, is a simple one that has inspired observers of nature across the world and across the centuries: the journal. “Nature journaling,” he reminded the students, “compels us to slow down, observe, reflect, and once again connect to the living world.”

Make sure you have time to slow down if you drop into the exhibition – an hour can vanish very quickly if you start turning the students’ pages. Their work is detailed, bursting with the joy of discovery, and often exquisitely executed.

So you can find flowers “printed” on to paper, through the simple use of Sellotape and, surprisingly, a hammer. Or the creation of a “dadaist” poem made up of words from an article about plants, cut up and scattered in a park and then rearranged into an order meaningful to the finder. Innovative maps of the area feature prominently, sometimes conjuring up images akin to Treasure Island, sometimes linking particular biodiversity features along the route, such as bee hives and pollinating plants.

It’s also remarkable that the students show such obvious affection for traditional tools like pens, paper and colouring pencils, and for almost vanished crafts like bark rubbing and flower pressing. Digital media are used very sparingly. Readman says he finds that this generation of design students often feel “oversaturated with screens”.

It’s evident from the wide range of sensory pleasures explored by the students that enjoying the Lifeline is not limited to birders or botanists. It is not so much about recognising particular species – although that may be part of the fun – as about intimate, focused personal experience of the natural world. And that fits well with the notion of a “green prescription” for good health.

“You are an explorer,” one of the students, Hannah Martin, tells the readers whom she hopes to nudge out on to the route to make their own records. “Your mission is to document the world around you as if you had never seen it before . . . Notice things. Notice patterns . . . Use all your senses. Everything is interesting. Take a closer look.”

Miceal Murray used to wonder why his mother called some plants weeds and pulled them up. He often felt that these rejects were just as beautiful as conventional garden flora. Sometimes he found, to his mother’s horror, that they tasted good as well.

So began an abiding fascination with the nutritional and medical benefits, and the sheer beauty, of the plants that are often relegated to “waste” ground. Although Murray now works in the mainstream restaurant business, he still leads occasional city walks to reawaken us to the value of what so often lies, ignored, beneath our feet.

He takes me to an unpromising-looking section of the Royal Canal, between Glasnevin and Broombridge in Dublin, littered with abandoned factories. The vegetation struggling through the tarmac doesn’t look hopeful.

Above all, you must know which plants not to eat: alexanders are delicious, but some of their umbellifer cousins could be the last thing you ever taste

Immediately, however, Murray is pointing out a cornucopia of edible and beneficial leaves, flowers, seeds and fruits. You can make balm from such very common plants as cleavers (aka goose-grass) and ribwort plantain. And the flower heads of the latter, sauteed, apparently have a pleasant, mushroomy taste.

Meadowsweet has compounds similar to aspirin, yarrow tea is good for digestion, horsetail tonic boosts the immune system. And the list goes on, and on: nettles, hawthorn, elderberry, burdock – and we find all these plants within a few hundred metres.

Murray makes it very clear that you need to do a little homework before tossing attractive-looking plants into the pot. Learn at what stage of growth a plant may be flavoursome, and when it may taste like dry wood. Above all, you must know which plants not to eat: alexanders are delicious, but some of their umbellifer cousins could be the last thing you ever taste.

So it’s best to start, he says, with an “entry level” foraged food such as blackberries. Right on cue a loaded bramble bush that might have sated the young Seamus Heaney springs into view. Better again, it indicates a pathway into a field I had never noticed before. At first glance it’s as unkempt a piece of “waste” ground as you could find in the city. But stepping into it is a revelation.

Despite the long drought, or perhaps because of it, an exceptional range of large, sculptural and very colourful plants are showing themselves off dramatically. Silver-grey mugwort, with its sagey aroma, wild carrot, buddleia, mayweed, silvery thistle seed heads, improbably bright yellow tansy and great snaking masses of weld have all run riot, and formed their own kind of order. It’s the kind of display I’ve only seen before on a Wisconsin prairie, and in spring.

If nature is doing this kind of thing in neglected corners of Dublin, with no help, it’s exciting to imagine what the Lifeline, with special plantings to connect such sites and attract pollinators, might be able to achieve.

Make this Stepaside brunch venue part of your weekend plans
4

Is my drunken, abusive husband capable of change?
5

Do you have a Caroline Flack relationship with social media?
Real news has value SUBSCRIBE