Walk for the weekend: Take a tour of the two Derrys

There's a frank walking tour of the Bogside, with a broader perspective from city walls 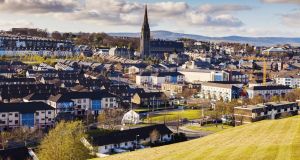 “You may be wondering if you’re going to hear the two sides of the story, well not really. Others can tell their story and I’ll respect it, but here’s mine.”

With these words, Paul Doherty sets the scene for our walking tour of Derry’s Bogside. In Rosseville Street where the British army halted the anti-internment march on Bloody Sunday in 1972, he sets out the darkly dystopian world into which he was born. Gloriously frank, his is clearly a one-sided account, but told in such passionate language, it is difficult to disagree with anything he says about gerrymandering and civil rights abuses.

Standing in the Bogside, he describes Bloody Sunday in visceral detail, when 13 protesters – including his father – were shot dead. Nearby, murals portray images the community wishes to have remembered: Bernadette Devlin urging defiance; Edward Daly under fire while evacuating a dying Bloody Sunday victim; and, intriguingly, a huge painting extolling the Irish ancestry of Argentine revolutionary Che Guevara.

Passing the Museum of Free Derry, which narrates the Troubles from the Bogside perspective, we reach the Bloody Sunday Monument. Considering his distressed early life, Doherty concludes here with a refreshing lack of bitterness. A supporter of the peace process and critic of segregated education, he is proud of Derry and believes the city has a bright future. His final words are of hope that “coming generations will not suffer the deprivation of my upbringing”.

Derry’s story cannot, of course, be told exclusively from a nationalist perspective so I head up through Magazine Gate and onto the renowned walls for a walking tour with Ronan McNamara. Here, things are more balanced, in a Derry/Londonderry sort of way, but unquestionably we are given both sides of the story.

Of Chinese-Irish extraction, McNamara is well placed to be objective. Gifted with an observant eye, he outlines the loyalist mindset. Bishop’s Gate was where sectarianism violence began to unfold. Here, in 1689, defenders of Derry, feeling isolated in a hostile country and fearing repetition of previous massacres, refused to surrender to Catholic King James. The Siege of Derry set in motion a cycle of tit-for-tat sectarian conflict, with loyalists continuing to feel besieged by Ireland’s Catholic majority. Marching the walls, Orangemen would throw coins into the Bogside; nationalists would respond with missiles. Clearly, some mutual distrust still persists, with Union Jacks and political slogans defiantly adorning the loyalist Fountain Estate below us.

McNamara concludes outside the award-winning Tower Museum. Here, I recall the words of former northern secretary Mo Mowlam: “The problem with Northern Ireland is that both sides are right.”

Much truth lies here, but still a surprising number of common threads merged with Doherty’s more edgy account: nationalists were denied civil rights; Bloody Sunday was a crime followed by a cover-up; segregated education is a major problem; the peace process is widely supported by both communities. Mutual suspicion still exists, but Derry folk look to a bright future.

Exploring the city afterwards, I find it hard to disagree. Favourably situated on the River Foyle and surrounded by beautiful hills Derry is, I conclude, Ireland’s best-located city. Intact walls, an intriguing mix of outstanding architecture and a gateway to Donegal or the Causeway Coast, it is difficult to see, given continuing peace, how Derry can avoid becoming a key destination for Irish tourism.

Time: One hour per walking tour.