The steep climb to the summit brings its reward: breathtaking panoramic views 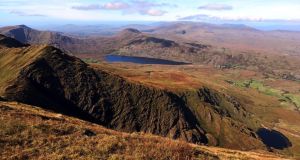 Concern has been expressed in recent years about the effect of human erosion on our more popular mountains. But be adventurous and stay away from the glue pots and you will have wonderful walking and climbing with not a soul to disturb your peace. “Mountain Views”, that superb online Mountaineering Club, lists 458 peaks over 500m and I doubt even 50 of them attract enough ramblers to make a serious erosional impact.

I have ambled around the peaks of the Iveragh Peninsula for many a year and have rarely met another walker, while the reeks, which guard the northern margin of the isthmus are ravaged with boot eroded tracks.

The Dunkerron Mountains form the central spine, of this, the broadest of the ravishing ridges of the southwest that pierce the coastal waters of the Atlantic Ocean. They are dominated in the north by Mullaghanattin (737m). It is only 10km south of Carrauntoohil, but you could be a world away. It is not the easiest mountain to get to. A long ridge leads up from the south; a day’s walk in itself. The lower eastern and western slopes are well fenced farmland and while the farmers are, in general, welcoming of individuals, or small groups of walkers, they are not gruntled with those who feel they can cross them with impunity, assuming “cross the fence with care”, a phrase common in some guide books, implies permission. By the way, I can tell you now, as one gets older one cannot cross a well-constructed fence with neither care nor dignity.

I had never considered an approach from the north as the great cliffs that face on to the Ballaghbeama Pass present a formidable barrier. Trundling up to the pass recently, I noticed that just before the cliffs, there is a steep craggy ramp leading up on to open moorland. The going is easy except at the start where rills flow under the long grass and my trekking poles proved most useful in poking for solid ground. Reaching Spot Height, 462m, the ground levels out and from there it is a straight forward walk west over two Spot Heights, until you come to the col under Mullaghattin.

The steep climb to the summit brings its reward with its all-around view of a sumptuous mountainscape with exceptional views in all directions; north east across precipitous ridges to the southern slopes of the reeks; north across the Owenrow Valley to Glenbeigh’s crests with the mountains of the Dingle Peninsula forming a hazy backdrop. To the east the Caha Mountains were like a dark oriental etching against the blue sky with the glittering silver of Kenmare Bay at its base.

Satiated, I returned to Spot Height, 594m and turned southwest down the ridge and descended into Derrynablatha Coom which has a much gentler slope and the promise of the seductive susurrations of a stream running over rounded rocks to put the final touch to a happy day.

Robert Persig says: “ The only zen you can find on the tops of mountains is the zen you bring up with you.” He was never on the Mullaghanattin ridge on a sunny autumn day.

Map Ordnance Survey Ireland Discovery Series sheet 78. Or Macgillycuddy’s Reeks 1:25.000 (Peaks named)
Start and finish The car park at the high point of the Ballaghbeama Gap. Grid Reference: 755 782. To get to the point to start climbing, walk back down the road until you come to the end of the cliffs
How to get there Take the Sneem Road at Moll’s Gap which is midway on the N71, Killarney to Kenmare Road. The road for Ballaghbeama and Glencar is signposted 10Km south west of Moll’s Gap
Time Five hours
Distance 10km
Total ascent 923m
Suitability Route is hard. Compass, map, rain gear are essential
Food and accommodation Killarney, Kenmare and Sneem