First Look: Inside the Devlin hotel in Ranelagh

Dublin's newest hotel has small €120 ModPods, a €180 room with bunk beds, and a rooftop restaurant

We take a sneak peek inside the doors of Dublin's newest hotel in the heart of Ranelagh village. There's a rooftop restaurant, a basement cinema and lots more besides. Video: Bryan O'Brien 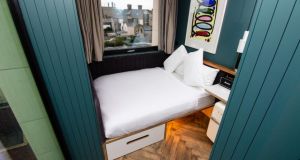 The Devlin: room rates start at €120 for a ModPod

The Dublin 6 suburb of Ranelagh gets its first hotel next month when the Devlin, latest in the ongoing juggernaut of new openings from the hospitality behemoth Press Up, opens its doors on November 1st.

This is the first new build rather than renovation from the rapidly expanding company, which now has more than 30 restaurant, cafe, bar and hotel businesses. Architects for the project are Dublin firm Lawrence and Long, with interiors by O’Donnell O’Neill Design.

The four-storey over-basement building at the southern end of the village’s main street is an imposing structure which got the go-ahead from An Bord Pleanála in June 2016, following seven separate objections being lodged by local residents.

‘Everything you need, and nothing you don’t’ is how a company spokeswoman describes the compact sleeping spaces, or pods

A sister hotel to the Dean, on Harcourt Street in Dublin 2, the newcomer has a rooftop restaurant and terrace, ground-floor bar and coffee shop, subterranean 42-seat cinema and bar, and 40 very petite bedrooms. “Everything you need, and nothing you don’t” is how a company spokeswoman describes the compact sleeping spaces, or pods. Unless you arrive by car, that is, because there are no designated parking spaces, should you need one.

“We are working on a couple of different solutions. Obviously parking is very limited in Ranelagh, so it will be going out on all our confirmation emails to guests that we don’t have parking in the immediate area,” says the hotel’s general manager, Kevin Hurley. “It’s an issue we experienced in The Dean as well, and had to find a solution with local car parks. We have been talking to local businesses [in Ranelagh] to see if we could rent private parking spaces, but there is nothing that we have confirmed 100 per cent yet.”

Travelling light might be the best idea in any case, as there is not a lot of room to swing a suitcase in the bedrooms, which come in four variations. There are ModPods (12sq m), with a double bed, a neat en suite, and not much more. Slightly larger SuperPods (16sq m) have double beds that can be accessed from both sides, rather than tucked up against a wall as with the smaller rooms. BunkPods (12sq m) have a bunk positioned overhead, perpendicular to the double. There is one TriPod (18sq m), which has a double, a single and a bunk.

“Small but perfect,” is how Ann-Marie O’Neill of O’Donnell O’Neill Design describes the rooms, which come with Dyson hairdryers, Nespresso coffee machines, Smeg mini fridges, Netflix installed on the wall-mounted TVs and Marshall amps for music. “Munchie Boxes” will be stocked with Irish brand snacks and house-made bottled cocktails. Rates start at €120 for the ModPods and rise in €20 increments as you move up the scale, with the TriPod costing from €180. Two of the rooms are wheelchair accessible.

Unless they want to binge on Netflix, or catch up on sleep, residents will want to spend their time in the hotel’s public spaces, the inspiration for which O’Neill describes as “stylish but with a timeless elegance”. All of the decorative lighting, furniture and joinery was designed by O’Donnell O’Neill Design and is bespoke to the space, O’Neill says.

The compact – that word again – check-in desk is unobtrusive at the entrance, doing nothing to divert the eye from the 100-seat Americana Bar behind and the 35-seat Dime coffee bar opposite. Lifestyle store Industry & Co will also have a small retail space in the lobby, selling small gift items.

The check-in desk will have a piece by the British artist Tracey Emin displayed overhead. “I Came Here For You” is the message played out in amber neon, chiming with the same artist’s “I Fell In Love Here” at The Dean. More than 160 artworks, with a focus on female artists, have been curated for the hotel by James Earley.

The intention is for the entire ground floor space “to be hive of activity”, with “people hot desking, grabbing a table and spending the day”, says Hurley. Rathmines coffee roastery TwoFifty Square will provide a house blend to Dime, and the Bretzel Bakery is designing a bespoke pastry offering.

The Americana Bar is dominated by a giant, 20-seat, teak-topped bar counter with black leather trim and bronze accents. O’Neill describes the colour scheme as “autumnal tans, greens and blacks – cosy colours, the sort of colours that wrap you up”. A dark, antique pine, barn-style ceiling adds a strongly rustic element.

Cocktails will be a big focus of the bar listings and, according to Hurley, who comes to this job after three years as the global brand ambassador for Teeling Whiskey, they will be a radical departure for Dublin. “We are using sous-vide, we are using centrifugal clarifiers, and we are using an ultra-sonic jewellery cleaner. A jewellery cleaner? “Yes, the vibrations change the flavour of what you put in it. Something like a negroni, if you put it into this, it changes the mouthfeel and the flavour of the drink.”

Is there a signature cocktail? “One drink that I’m quite excited about involves some Tanqueray gin, a small bit of white port and carbonated pineapple soda that we will make here ourselves. We use a method of extracting the juice from the pineapple by freezing rather than juicing or pressing.”

On the top floor of the building, Layla’s is a glassbox restaurant and terrace, with jaw-dropping almost 360-degree views taking in city landmarks – and the occasional cruise ship in Dublin Port – right around to the Dublin mountains. Quite a few formerly secluded residential properties and their gardens are also part of the picture. There are 95 seats in the restaurant, some in tan leather six-seater booths, and a further 45 on the terrace

Head chef Paul Devoy comes to the venture from a two-year stint as head chef at the Fitzwilliam Hotel in Dublin 2. A former butcher, Devoy retrained by doing a degree in culinary arts. He described his menu for Layla’s as “quirky with a little bit of fusion”. There are beef tacos alongside spiced tuna ceviche on the starters, a grill menu with four steaks and a daily fish special, and “something for everyone” selection of additional main courses.

In the basement, the 42-seat Stella Theatre Ranelagh will have a private bar and a snack and light meal menu including dumplings, tacos, burgers, hot dogs and fried chicken. Ann-Marie O’Neill describes the space as having “individual mid-century styled armchairs and couches with cosy lamps and side tables beside each armchair.” There will be twice daily screenings of what Press Up’s cinema director, Karl Geraghty, describes as “indie films, arthouse movies and cult classics.”