Walk for the weekend: In the footsteps of medieval travellers 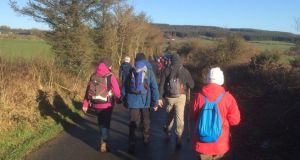 St Declan’s Way: Walking in laneways that once echoed to the footsteps of medieval travellers

Christmas is the season for family, friends and indolent togetherness. A few days cooped up en famille, however, and cabin fever invariably triumphs over closeness. So, I was glad when a guided walk along a newly reopened section of St Declan’s Way allowed me the opportunity to escape the Yuletide clutches of domesticity.

With worryingly enthusiastic encouragement from my family, I set off through the wintry dawn of a frosty morning. Soon, a tardy rising sun lighted the eastern skies and splendidly reddened the snow-cloaked Galtee Mountains.

Traversing a somnolent countryside on gloriously traffic-free roads, I swept into Co Waterford while reflecting that winter mornings are indeed magical. At the blink-and-you-miss-it settlement of Grange, I joined my fellow walkers.

Immediately it became apparent this was a grupa dhá theanga: many participants were chatting in lilting Munster Irish. I shouldn’t have been surprised, of course, for nearby lies the vibrant Irish-speaking area of Gaeltacht na nDéise.

Outing myself as a bit of a gaeilgeoir, I was soon chatting with the locals, who informed me that each summer they walked the entire route in an impressively speedy three days.

Soon, we were away under the leadership of Kevin O’Donnell and Mark Rylands from Knockmealdown Active. Unerringly, they led us northwards along the ancient Bother an Riolog. Forty-strong, we soldiered bucolic laneways that once echoed to the footsteps of medieval travellers.

Local tradition holds that St Declan – who many historians believe preceded Patrick as Ireland’s first Christian missionary – journeyed this way to Cashel, where he was appointed Bishop of the Deise.

A pleasant boreen through hazel woods led us to the dangerously swollen River Licky. In Declan’s time, this would have been a hazardous barrier tackled with stepping stones, but we enjoyed the luxury of a pretty footbridge leading to the fertile Waterford heartlands beyond.

After the hamlet of Cross, the path rose to a high point that offered an Instagram-pretty view of the extravagantly snowcapped Knockmealdowns. Apropos of nothing, this immediately reminded me of the great white-topped Sierra Nevada Mountains I had once encountered on a springtime visit to Spain.

By the riverside at Goish, we halted for lunch, where I discovered participants had travelled from as far away as Kerry and Dublin to take part. The stop provided O’Donnell with the opportunity to inform us that the full 104km route from Ardmore to Cashel is set to reopen in the spring. To mark the occasion there will be a pilgrim walk along a different part of the route on the last Saturday of each month, starting in March.

With many adding the dates to their phone calendars, we segued onwards in the deeply alluring footsteps of saints past. Winter dusk was setting in as we traversed the low hills above Aglish and began our final descent towards the twinkling lights at Knocknaskagh. Backlighted by a crescent moon, we arrived as someone’s – very smart – smartphone informed us we had completed 23km.

Later, as we broke bread together in the convivial atmosphere of Merry’s Pub, Dungarvan, many promises were made to complete the full pilgrimage in the coming summer.

Suitability: Lengthy but straightforward walk offering no real challenges. Waymarkers are, however, not all in place but will be by the coming summer. Transport must be arranged at the end.