Walk for the weekend: Rosscahill Woods are a hidden treasure for a fine day out near Galway 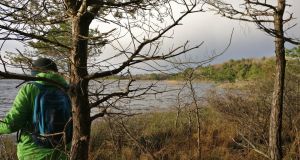 It’s worth wandering off onto rougher trails that will bring you into wilder parts of the forest, and down to the lakeshore

For anyone travelling west towards the mountains of Connemara, Ross Lake near Moycullen is an early sign of the wildness beyond. Coming from Galway city, the lake catches your eye with its thickly wooded shore, and the striking lime façade of the towering manor on its north bank.

Most walkers drive on to the hills and coast farther west. But the forest on the western shore of the lake makes for a fine short ramble, and on a cold day in early winter we walked here under mercurial skies.

The forest is part of the old Ross Estate, and is largely a mix of planted spruce and larch. And while there are sad-looking areas of clear felling, these have been left to regenerate naturally, so that in early winter the last yellow leaves of hazel and willow added fresh life to a harsh landscape. In places the coral-pink of spindle berries, the last fruit in the woods, brightened the greying forest too.

You can take the main track straight down through the wood, and then follow a small loop at the southern end of the trail. But it’s worth wandering off onto rougher trails that will bring you into wilder parts of the forest, and down to the lakeshore. There are also a series of marked mountain bike trails here.

These woods also provide important habitat for a colony of lesser horseshoe bats nesting on the grounds of nearby Ross Castle. The estate’s main house was built about 1840 but incorporated the fabric of a much older tower house. It once sat on a vast estate owned by the Martin family, the former Galway traders, who also owned Ballynahinch Castle near Recess.

Deeper into the forest, the sky darkened and wintry showers arrived. The rain turned to hail and then snow, the first we’d seen of the season, then back to rain again. We struggled to find shelter under scrawny spruces, and were soon soaked.

Farther on, there was a flash of brown across the path in front of us, and we saw the white rump of a deer slink into the trees. We tried to follow it, but never saw it again. But it did lead us into the finest part of the forest, among old ash and beech, and mossy limestone boulders.

Down on the lakeshore there were some wonderful gnarled scots pine too, and waterlogged alder and willow. Come walking here in the morning or late afternoon if you can, when the low winter sun sits deep behind the trees, shifting the light with each turn of the trail.

Ross Lake and its shoreline – part of a special area of conservation – are also covered with marl, a lime-rich mud, giving its water and a clear blue hue in the sunlight.

Map: OSI Discovery Series sheets 45 covers the area, but openstreetmag.org and the Viewranger app have the best maps I’ve found of the forest trails.

Trailhead: Coming from Galway city on the N59, take the right turn in Rosscahill signposted for Brigit’s Garden and Killannin (the second right after Kinnevey’s pub). The entrance to Rosscahill Woods is about 1km down on your right at 53.386950, -9.231393.

Effort: 5km/1.5 hours, but you can extend this if you like by wandering onto side-trails.

Suitability: Easy walking on forest roads and trails but can be quite muddy and wet underfoot.

‘To die of love’: The 1968 sex scandal that still fascinates France
6