Walk for the Weekend: An enchanting hike with a dark past 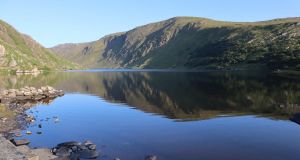 Having explored all the great glaciated valleys of the Beara Peninsula, I finally got around to Glenbeg (the small glen) this summer. While the long heatwave had enhanced the beauty of the landscape; it had also bestowed on the testing terrain of the Caha Mountains a more benign carapace, with dry rock providing good grip and normally wet bog transformed into the natural equivalent of a deep-pile carpet.

“An Gleann Beag” may be its name but when you round the final corner of the road from Ardgroom the image that confronts you is akin to the entrance of a Norwegian fjord with cliffs plunging straight into the waters of Glenbeg Lough. Tooreennamna (The Little Towers of the Women), 510m, on the northern side of the valley looks the more formidable of the two guardian peaks but access is much easier and if you skirt around the base of the cliffs a steep grassy ramp leads to the summit ridge. It is infested in places with bracken but if you have a good eye you will spot the route of least encroachment.

The attainment of the ridge, which is narrow but easily negotiable, opens up a view of the contorted crags of Lackawee to the south, while, in complete contrast, the valley floor at the head of the glen is a Lacustrine Delta forming an oasis of fertile farmland. Such deltas are formed when melt-water torrents deposit their load when they are abruptly slowed down by the still waters of a lake.

The ridge leading to the summit is unexpectedly dotted with pointed rock outcrops (presumably the “Tooreennamna”), and you can either indulge in a bit of minor scrambling on these pert pinnacles or skirt decorously around them on their eastern side.

The view from the summit has a variety of vistas; from the rugged confines of Glenbeg, across the broad expanse of Kenmare Bay to the uplands of the Iveragh Peninsula, dominated at their northern extremities by the proud peaks of the Macgillycuddy Reeks. Further south, the skyline isn’t as dramatic as the ice sheet moving south from the Reeks planed large stretches of its uplands into long stretches of undulating plateau.

An easy ascent brought me to Spot Height, 584m, on the Esktarriff Ridge, which gave a view down into the Rabhach’s Glen, the scene of two notorious murders in 1814; the victims being a deserting sailor from Berehaven and a female witness. The perpetrator, O’Sullivan Rabhach, hid out in caves in the cliffs for many months before being captured and subsequently hanged for his crimes.

By now, the sun had begun its descent to the horizon, turning the surface of the sea to a coruscating silver from which rose the profiles of the Skelligs like shards of black slate.

I took an easier line of descent by dropping down a gentler slope just beyond the first pinnacle on the ridge and sat on the wall by the lake; enchanted by the reflection of Lackawee Mountain turning gold in the still waters.

Start and finish The outlet of Glenbeg Lough. Good-sized car park
How to get there Turn off at the bridge in Ardgroom village which is on the R571, Kenmare to Castletownbere road
Time Three hours
Distance 7km
Total ascent 500m
Suitability Easy. Good boots and weather-appropriate clothing
Food and accommodation Ardgroom, Kenmare, Castletownbere