A Cork walk with expansive views perfect for clearing the head 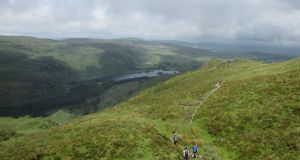 Enveloped by swirling mist among Cork’s Shehy Mountains, I am feeling a bit addled. Of course, I deny being lost, but will concede to not having full awareness of my location. The culprit, I believe, is last night. This was spent sampling the delightfully compelling Taste of West Cork Food Festival.

Invited by Neil Lucey, of the Gougane Barra Hotel, to the Festival’s Celtic Camino Evening, which celebrated a new pilgrim route, walked partly in Ireland and partly in Spain, I was soon enthral to the convivial atmosphere. The extensive menu  mixed the best of Irish and Gallaecian cuisine in a 4-hour culinary journey.

Each course was easy on the palate, but my downfall came in the form of sommelier Colm McCan of Ballymaloe House. Choosing the most celebrated wines from the Camino of St James, he provided a temptation, which in the tradition of Oscar Wilde, I was unable to resist.

Unsurprisingly, perhaps, I found myself in a more delicate state than usual next morning and decided to head out onto the nearby hills, as a belated head clearing exercise. Initially, all went well on a bright autumnal morning. Waymarkers from the hotel, denoting both the Beara Way and St Finbarr’s Pilgrim Path conveyed me gently uphill. Expansive views soon unfolded over serene Gougane Barra lake, with the Riverdance of bright waters immediately putting me in mind of Glendalough without crowds.

Crossing open mountainside, there was a hint of rain on the wind as I gained a fence and followed it right and uphill to the high point of Conigar. Mist closed in as I reached Lough Fada, where the comforting walking arrows abruptly disappeared to the south.

It wasn’t a problem, however, as a stout fence led me onwards past lonesome Lough Glas to a tiny curl of water at the head of a steep gully that once served as a challenging mass-path to St Finbarr’s Church.

Here, the fence continued to pierce the gloom in a northerly direction while surmounting the many rock ribs that are so typical of West Cork hills. Abandoning the fence, I then struck out northeast along the ridge for Bealick, the summit of which Neil Lucey had informed would be marked by a pile of stones on a boulder. Try as I might I couldn’t find it, however.

Eventually, conceding that I wasn’t operating at the top of my game today, I pulled out my trusty old GPS and tried to focus my unwilling brain on the grid reference for my location; it appeared to show I had blundered past Bealick’s second summit.

Retracing my steps, I decided this was enough for one day. Fixing a bearing west of south, I descended reasonably benign terrain until I was relieved to see the outline of a wood looming from the mist directly ahead.

Soon after, I picked up the arrows for the Slí Sleibhe walking route and followed it right. A steep path, by a busy little waterfall, now descended to the upper carpark of Gougane Barra.

Then, as I made my way down the glen for a welcome coffee in the hotel, I ruefully reflected wine and walking aren’t the most cohesive of partners.

Getting there: From Cork City take the N22 Killarney Road and then follow the R584 left. Beyond Ballingeary, Gougane Barra is signposted to the right.

Suitability: Even in good weather this is a demanding outing, suitable only for those comfortable with remote and featureless terrain. Navigation becomes challenging in mist.

Michael Harding: ‘Rage began to boil inside me, but I didn’t let it surface’
3