How Fionn Davenport learnt to stop worrying and embrace the fear 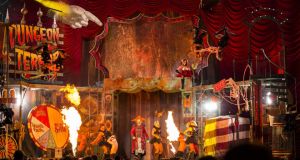 I’ve always hated scary films and have never understood the attraction of the horror genre, but when a 6ft 5in masked Jason carrying a chainsaw came at me in the darkened corridor of Camp Crystal Lake, I screeched a bit, my face twisted in fear and I felt something close to elation.

I was in the Jason vs Freddy house at Universal’s Halloween Horror Nights, which this year celebrates its 25th anniversary with the return of its best-known icon, Jack the Clown, whose show The Carnage Returns climaxes with him disposing of a victim in a giant blender while the crowd shrieks its delight. Halloween Horror Nights is all about the gore – or at least a very convincing pretence of it.

At first, the thought of being deliberately terrified sets me on edge. Also, I’m an ignorant embarrassment to the true horror fan, who is a particularly trenchant type of geek. I’ve never heard of The Purge movies, and I haven’t a clue how many Nightmare on Elm Street movies there have been (nine, I find out). It’s decided that, come the zombie apocalypse I’d be the first to go.

The heart of the action is in nine haunted houses, elaborate mazes built in giant sound stages spread throughout the Universal Studios theme park.

To get there, I had to walk through a selection of five ‘scare zones,’ where ‘scareactors’ come at you at random.

I met the angry schoolgirl in white face carrying a chainsaw (an effective terror tool, even if it’s just a dummy one making a very real noise) and the ghoul with the blood-soaked smile flashing his stained teeth five inches from my face. None of the performers – 1,200 of them in total – are allowed to touch you, but it doesn’t make them any less scarifying.

Finally, I get to the houses. I tiptoed warily through the Terminus from The Walking Dead, felt my heart rate go up in the paranormal weirdness that was Insidious and had the tar scared out of me in Camp Crystal Lake and 1428 Elm Street, where first Jason and then Freddy had a go at me before going at each other.

By the time I got to the last one – Asylum in Wonderland, a wonderfully frightening rendition of the Alice story, in completely disorienting 3D – something had happened. I’d been scared solid for three hours, but I loved it.

Not unlike conquering my dislike of spicy food, I embraced the safe terror of horror and relished the adrenaline rush. I made a promise to watch all of the horror films I’d spent years assiduously avoiding.

As I made my way back to my hotel, I felt elated and satisfied: at the very least, I had learnt enough to survive past the first wave of the zombie apocalypse.