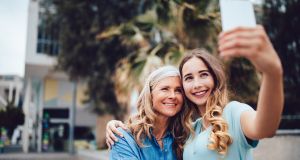 Parents helped cover the costs 85 per cent of the time, according to research. Photograph: iStock

The adult children of Irish parents appear to be suffering from a failure to launch and are struggling to stand on their own two feet when it comes to their summer holidays.

The vast majority of people aged between 18 and 24 still holiday with their folks and are happy for them to pick up the tab, according to a new survey.

It suggest that the “travel agency of man and dad” is booming with 71 per cent of young adults aged between 18 and 24 saying they had been on holiday with their parents at least once in the last 12 months.

The research from Enterprise Rent-A-Car also found that parents had helped to cover the costs 85 per cent of the time.

All told 65 per cent of parents said they paid for flights for their offspring who have yet to take flight by themselves while accommodation costs were covered 58 per cent of the time with one in two saying they also paid for their adult children’s food while on holidays together.

Just over one in five adults admit getting financial help is an ‘upside’ of going away with parents, one in 10 said it was the main reason for doing so with spending quality time together said to be a more important factor.

More than half of Irish adults said they go on holiday with their parents or in-laws to spend time with them and 11 per cent said the main advantage of holidaying with parents was that it allowed them to go on the types of holiday they wouldn’t otherwise be able to afford.

More than 90 per cent of those polled said they would go on holidays with their parents or in-laws again although some downsides were identified including an absence of privacy and rows over what to watch on the television.

“It’s incredible just how many Irish adults go on holiday with parents who cover all or part of the costs. Anyone with young children may be surprised that the ‘travel agency of mum and dad’ continues long after children have grown up,” said the car rental company’s managing director, George O’Connor.

When asked Irish social media users were positive about the idea of going on holidays with their children – or their parents, depending on their age – although there were mixed views as to who should pay.

Brian Flynn is off to Washington DC with his 37-year-old for a few days soon “and long may it continue”. He says it would always “depend on their circumstances” as to who paid.

“I’m 24 and went away with them last year for a few days but I paid myself! Last holiday they paid for me I was 16 or 17,” said Jennifer McCormack.

“I don’t think children have to stop going if it’s something a family enjoy doing together,” suggested Jennifer Doherty. “Parents should definitely stop paying for them when they start working and have money to pay for themselves.”

Henry McCann is 19 and his sister is 18. “My parents have always said that we are more than welcome to come away with them anytime. We are both students and would never expect us to pay. Only reason we didn’t go this year was the dates conflicted with other plans.”

Paul Flynn: The hulking carnivore inside me is utterly bored
7

A week of eased restrictions: ‘It’s reopening way too fast’
9