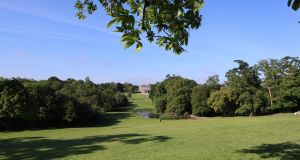 Doneraile Wildlife Park: Formerly the Demesne of the St Legers, the park dates from the early Georgian period and covers an area of 166 hectares.

Doneraile Wildlife Park, though it might not have much name-recognition outside of Munster, was listed in the top five “Free-to-Enter” tourist attractions in the country by Fáilte Ireland in 2016. This put it in such august company as the National Gallery and Irish Museum of Modern Art and no less worthy of a visit than those august institutions.

It is an attraction that is much more than its name implies. Formerly the Demesne of the St Legers, the park dates from the early Georgian period and covers an area of 166 hectares.

Created in the style of Capability Brown, that great designer, whose forte was creating “natural” landscapes, the park has broad vistas of parkland, bounded by extensive plantings of a variety of deciduous trees, including redwoods, sycamore, cherry, yew and plane. Coppices of beech, oak, chestnuts and lime dot the open parkland.

Water is an important element in the creation of such settings and the estate was fortunate in that the Awbeg River flowed through it and was diverted to form lakes, cascades and ponds, greatly enhancing the beauty of the setting. And, of course, where you have waterways, you must have bridges and there are a few delightful arched stone bridges framed by abundant foliage that you will come across in your perambulations.

The centrepiece of the demesne is Doneraile House, which was rescued by the Georgian Society and is currently being restored with a view to opening it to the public eventually. It is surrounded by a network of pathways, the one leading east from the top of the car park providing a view which sweeps down a corridor of parkland flanked by trees to a lake and then up the opposite slope where the house sits on the crest.

I followed the path down to the lake where one of the arched bridges crosses the Awbeg. Flanked by purple rhododendron and tall sycamores, it presented an attractive scene, the more so because the image was painted upside-down on the still waters beneath. Instead of crossing the bridge, I took the path that runs alongside the Awbeg; a most pleasant saunter, sheltered by trees and with the soft gurgling of the river providing an accompaniment to the chorus of bird song overhead.

Reaching the end, I turned right on to the track that borders the periphery of the park and provides alternate stretches of woodland which open out into vistas of parkland on which herds of deer and cattle grazed. Arriving at the house, I paused at the tea rooms which lurk around the back before wandering happily along a maze of woodland trails which brought me back to the lake. Retracing my steps beside the Awbeg, I connected with the peripheral path, this time turning left to follow it uphill to the top of the crest which overlooks the entire demesne. From here, I could appreciate the genius of the design as it merged into the natural landscape of rich pasture bordered by natural woodland without a conifer in sight. In the distance, the Nagles and Boggeragh Mountains were etched against the blue sky.

I am looking forward to returning later in the year to enjoy what must be a glorious autumn.

How to get there: Doneraile is 7km to the east of N20, Cork-Limerick Road. Turn on to the R581 at Twopothouse, 6km north of Mallow.

Distance: 10km, if you walk all the paths.

Food and drink quiz: Who is the only chef to be sued by a sitting US president?
6

It’s our 20th wedding anniversary. I wonder will he remember
10