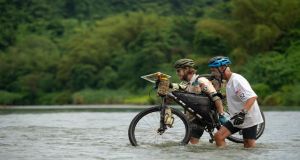 “We didn’t know what we were letting ourselves in for. We knew it was going to be pretty intense, but nothing prepared us for what unfolded.” Ultra endurance athlete and Donegal man, Jason Black (49), is referring to the Eco Challenge adventure race.

“The organisers kept telling us it was going to be the toughest adventure race in the world. But you hear that all the time. You don’t usually take too much heed as you assume they are trying to sell the race but I can tell you this was head and shoulders the toughest ultra race I was ever involved in in my life.”

Coming from a man who has conquered both K2 and Everest, holds records on Mt Kilimanjaro and Elbrus and has won some of the world’s toughest endurance cycling events including the Race Across America and the Race Around Ireland, it really pays testament to how brutal the Eco Challenge is.

Taking place in Fiji, the race was originally the brainchild of Mark Burnett back in 1992 (he went on to create other shows such as Survivor and The Apprentice). It has since earned its reputation as the most ruthless adventure race on the planet. After a seven-year hiatus, the race returned, this time the subject of a 10-part TV series hosted by Bear Grylls.

The show – which took place last September and is now available to watch on Amazon Prime – documents 66 teams of four as they race non-stop for 24 hours per day for up to 11 consecutive days across hundreds of kilometres of rugged back country terrain, complete with mountains, jungles, and oceans in a bid to reach the finish line first. All of the navigation is done with just a map and compass and the disciplines include hiking, swimming, kayaking, stand-up paddle boarding, whitewater rafting, biking, climbing and deep-sea diving. Rest is almost non-existent with competitors sleeping little more than an hour per day.

When I ask Black what the toughest aspect of the race was, he takes a long pause, struggling to identify just one element of the event that stood out as more challenging than the others.

“Everything about this race was tough. The terrain was brutal. We had to battle through jungle, rivers, thick bush and mountains in monsoon conditions.

“We also had no idea about the course until Bear Grylls arrived five minutes before the race started and unveiled the map. We were told the disciplines in advance and given one map to get us from the start line to the first transition and that was it,” Black explains.

On paper many of the disciplines seemed very manageable but the reality was often very different. “It was just savage. We had to do these river sections on foot where the water was up over my chest. We had to wade through that water for about eight or nine hours and there was everything in there – rats and snakes, the lot.

“I am really strong on the bike so thought the bike section would give me a chance to recover. On paper it looked really easy as it was only 70km long. Holy sweet Jesus, I was so wrong. It was nice and dry when we set off and then the heavens opened and it was a monsoon. We went from covering 20-25km per hour to moving at snail’s pace. It was the most gruesome 70km of my life on a bicycle. The clay on the ground is what they use to build their houses and I can see why, it’s like cement. We thought we would be on that section for five or six hours max. I think it took us 24 hours. We came out of it totally exhausted – we were on our hands and knees.”

Little did Black know at that point that the biggest challenge was yet to come. Just as he was nearing the end of the race he approached one of the medical team to treat a cut on his leg. “I had a few open gashes on my legs. Something had got in through the cuts and was running riot inside me. We pressed on towards the finish but it was a very scary time. I was hospitalised straight after the race and subsequently airlifted to a special disease unit in New Zealand. Things were pretty hairy there for a while. They had actually never seen one of the organisms that was inside my body so they had to start growing the cultures in the lab to match an antibiotic for it. My internal organs were shutting down. It took me a full six months after the race to feel back to normal again.”

However the near-death experience has done nothing to quell Black’s enthusiasm for adventure. When we speak he is preparing to take on a 2,000km off-road cycling event. The mind boggles as to how he can even contemplate such a feat after such a close call last year.

“The world is this wonderful adventure playground. I’ve been gifted a human body that can survive in it and while it’s there to be explored I am going to continue to do that.

“I’ve pushed my body to the limits, sometimes beyond the limits and I’ve survived it. I don’t want to dance with the devil, I’ve got too many reasons to come home. I’d like to think that I’ve got the experience to be able to identify that boundary and I’ve made a promise to my wife, Sharon, that I will turn around if I ever get to a place that I think goes beyond that boundary.”