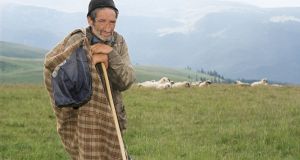 A shepherd with his flock in the Carpathian Mountains. Photograph: Dennis Galante Photo Inc/Corbis via Getty

For centuries, villages across the Ukrainian Carpathian mountains have come alive in celebration in early summer. The festivities included singing, dancing and the obligatory trembita (a local wooden alpine horn) playing.

The occasion was to say a symbolic farewell to the shepherds who would lead the flocks of sheep and other animals to the highlands, to polonynas, the meadows of the Carpathian mountains.

However, this year the villages are silent. Due to quarantine restrictions, the gatherings are prohibited. Nevertheless, the shepherds will still leave their villages and head for the mountains, as they have for centuries.

There is something undeniably heroic, Homerian in their lifestyle. We are learning more from our months in lockdown, how difficult it can be to be away from society, but year after year, the shepherds head to the highest mountain meadows in May, accompanied only by sheep, to spend four months isolated from civilisation, from other people, from the world itself.

Think Kerouac’s “Alone on a Mountaintop” from the Lonesome Traveler collection but with added daily, non-stop manual labour that is extremely challenging. Patience is a staple of their craft.

Usually passed down from father to son, the shepherd’s work is surrounded by rituals, symbols and certain Carpathian mysticism. The conditions of their craft haven’t changed much over the years. Shepherds lead the flocks to polonynas, usually located higher than 1,200m, for better pasture. There are wooden cottages, called kolyba, where the shepherds live.

Inside the cottage is one of the most powerful symbols, a vatra – the open fire that should be kept alive at all times. Tradition says that if it dies, bad luck will follow. And luck is sacred to shepherds. Isolated and exposed to the ever-changing conditions, they count on luck to lead the flocks down in September safely.

The typical working day of a Carpathian shepherd begins at daybreak, when they walk miles across the meadows to find their sheep for the first milking of the day. This is repeated twice more before sunset. Whatever the weather, the work remains the same every day. As darkness falls, the shepherd’s real work begins: the battle against wolves and other predators. They must stay alert at all times, often meaning nights without sleep.

It’s also mentally tough. Being isolated from family and civilisation is difficult the shepherds say, but they grow used to it.

“There is no time to feel lonely, there’s always something to do,” says Ivan Matsola, a shepherd from Kolochava, a village in the Zakarpattia region.

It is the non-stop daily routine that keeps the shepherds busy – and sane. Patience is a staple of their craft. Sometimes family members or animal owners pay a visit but it’s a rarity as they are usually long distances from the nearest village. They use music to ease boredom – many of the shepherds play the traditional Carpathian flute or listen to the radio, their only link to the outer world.

“If you love doing something and feel passionate about it, everything’s easy,” says Matsola, who’s been shepherding for more than 25 years.

For as long as shepherds have been in the highlands, they have also been using the milk they collect to making cheese. There are two types: bryndza is the most famous cheese from the region. To make it, fresh milk is poured into a cauldron above an open fire and mixed with a special fermenting agent called klyag, made of dried and powdered lamb stomach. When the cheese is formed into a budz (a block), the shepherd collects it into a round shape and hangs it to dry in a traditional linen cloth.

The second variety is vurda, which is made from whey (a byproduct of making bryndza) and is boiled in a separate kettle with warm milk. These two products are then given to the sheep owners according to the amounts of milk their animals produce.

After four months, the shepherd’s self-isolation in the mountains ends in September with a ceremonial descent from polonynas, leading the flocks back to the homesteads in an act traditionally called a “divorce”.

“I just love going to the mountains, I can’t imagine myself doing anything else,” says Matsola.

But he says it’s becoming harder for people to keep sheep, as the meat, milk and cheese prices shrink every year and the ancient tradition of processing wool is disappearing too.

“It’s almost impossible to sell wool nowadays, there’s no other choice but to simply burn it.”

Nevertheless, he believes that there’s still a chance to save the industry through state support and private investment.

The shepherd’s life may be dying out in the Carpathian mountains, but their annual retreat into the solitude of the mountains is still an important rite. They remain guardians of important local traditions, and a spirit of patience, forbearance. and keeping the vatra fire alive.