Ryanair rated joint-worst airline at dealing with refunds in 2020

Delaying and refusing refunds for cancelled flights due to lockdown results in ‘abysmally low’ scores in Which? survey 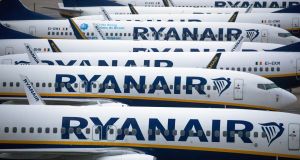 Eight out of 10 Ryanair customers said in a Which? survey that they were dissatisfied with the refund service they received after their flight was cancelled in 2020. Photographer: Chris Ratcliffe/Bloomberg

Ryanair has been rated joint-worst airline for customer service by people who tried to get a refund after their flight was cancelled.

The airline scored “abysmally low”, in joint last place with Virgin Atlantic, in a survey conducted by Which? Travel, with eight out of 10 customers saying they were dissatisfied with the refund service they received after their flight was cancelled in 2020.

Millions of flights were grounded in 2020 as a result of the coronavirus crisis, leaving people fighting for refunds which they are legally entitled to receive within seven days of cancellation.

The survey also found that a third of respondents who had a flight cancelled by Ryanair or Virgin Atlantic waited more than three months for their refund. None of the Ryanair passengers surveyed received their refund within the legal time frame.

Of the six airlines Which? asked about, British carrier Jet2 came out top with a satisfaction score of 76 per cent. Eight out of 10 Jet2 passengers (83 per cent) told Which? they received their refund within 28 days, with 34 per cent receiving it within seven days. None reported waiting more than three months.

In separate research conducted this month, Which? also found that Ryanair is refusing to offer refunds on flights that continue to operate, despite people not being able to travel due to national lockdown rules. Which? asked airlines about their refund policies. Some said customers could claim a cash refund, British Airways said passengers had to rebook and while Ryanair didn’t respond, its website says passengers can rebook.

Rory Boland, editor of Which? Travel, said it is “vital that lessons are learned from the previous handling of refunds and cancellations. Airlines cannot be allowed to continue to behave in this way, so the [British] Competition and Markets Authority (CMA) and Civil Aviation Authority (CAA) must be ready to act if any are found to still be breaking the law on refunds.”

Under the new lockdown, flight cancellations present less of an issue as so few people have bookings, but Boland pointed out that many people whose flights were grounded at the start of the pandemic rebooked for this year, little knowing that they might face the same problem in spring 2021 if travel restrictions have not been eased.