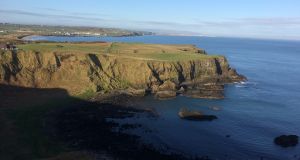 It is shaping up to be another year for staycationing. Despite tantalising glimpses of the sunny uplands promised by Covid vaccines, many will not feel ready for international travel. The good news is, however, once lockdown is lifted, there are many places to explore and things to do in Ireland, and sampling these also means supporting a hard-pressed local economy. Listed below are just a few of the captivating experiences that are guaranteed to make staycationing later on this year a memorable experience.

Located on the Aran island of Inis Mór, off the Galway coast, Poll na bPéist (the worm hole or serpent’s lair) is renowned as the magical setting for the Red Bull diving competition. Akin to a perfectly symmetrical swimming pool cut into the rocks, the pool is fed with seawater through underground caverns. A mystical place of stone, it shows nature at its most visceral and makes a sublime location for wild swimming. This should be done only in good weather and, even then, be careful when there is an ocean swell. Swim only in a group and have one person remain on land to assist with exiting the water as this can sometimes be tricky. Ask locally for directions.

A bird’s eye view
For a great family outing to one of Ireland’s finest viewing points, leave the visitor centre at Connemara National Park, Letterfrack and follow the Sruffaunboy Nature Trail before branching towards the quartzite pyramid of Diamond Hill. Footpaths and boardwalks now grease the wheels of your ascent to the mountain ridge. Here, it is about 500m to the summit and a spectacular 360-degree vista commanding the coastal islands of Connemara, the Twelve Bens, Kylemore Abbey and, directly north, the summit of Mweelrea, Connacht’s highest mountain. Descend a steepish path, circling south of the Diamond before re-gaining your ascent route.

The Stairway to Heaven
Despite years of gloomy predictions, it has finally been confirmed that the Irish Border is to remain “soft”. This is great news for those exploring the abundant outdoor attractions of this region. One of the latest additions is the Legnabrocky Trail. Ideal for family outings and generally known as the Stairway to Heaven, this consists of a well-constructed trail that conveys walkers high into the Cuilcagh Mountains. From the trailhead, about 1km from Marble Arch Caves, follow a 6km path to a spectacular boardwalk. This conveys you seamlessly upwards to a viewing platform offering expansive vistas across the lake-strewn Fermanagh countryside. Afterwards, return by your ascent route. Information: walkni.com/walks/cuilcagh-boardwalk-trail/

Paddle your own canoe
Kids invariably love water-based activities and the extremely safe River Barrow makes a perfect playground for families. Ireland’s second-longest river is navigable for 68km from Athy to St Mullin’s. Activity provider Paddle Your Own Canoe offers a variety of packages including a five-day canoeing experience along the Barrow from Athy to St Mullins. You have the choice of camping wild on the riverbank each night or staying overnight in a hotel or B&B. Then, you just let slow motion time drift indolently by as the family gets close and personal with one of Ireland’s great waterways. Information: paddleyourowncanoe.ie

Step back in time
Imagine celebrating Ireland’s national holiday, not in March but in high summer. It could have happened, for July 24th is the feast day for a saint who, most likely, preceded St Patrick as an Irish missionary. St Declan is now set to reclaim his rightful inheritance with the official reopening in 2021 of Ireland’s longest pilgrim path. At 115km, St Declan’s Way takes about six days to hike and links royal Cashel with monastic Ardmore while visiting Cahir Castle, Mount Melleray Abbey and deeply historic Lismore enroute. Information: stdeclansway.ie

Spin the Ring of Beara
It’s the shy southern cousin of the Iveragh Peninsula, but if you abhor busy, coach-colonised roads, then the Beara Way Cycling Route is for you. While the 138km circuit can be completed, by even moderately fit cyclists, in three days, Beara is really a place for slow tourism. Starting from Glengarriff, take a leisurely six days to visit rugged Bere Island, join a meditation at the Dzogchen Beara Retreat Centre and further on take the cable car to Dursey Island. Returning, explore the mining trails above dramatically located Allihies, soak up the atmosphere in colourful Eyeries and top off by visiting Derreen House and Gardens. Information: explorewestcork.ie/cycling

Caves are Ireland’s last frontier with some remaining only partly explored. True adventurers won’t, therefore, be satisfied with sanitised show caves as these are far removed from the demanding reality of potholing. If adventure is your thing, don’t go down alone, for the underworld is filled with perils from floods to rockfalls. Instead, join an experienced instructor from Corralea Activity Centre, Co Fermanagh who will bring you deep underground to explore a fascinating world of rivers, waterfalls and lofty chambers. Exploring by head torch, you will wade underground rivers to appreciate the silent, pitch-black cave environment. Information: corralea.com

The mystical path
Shrouded in myth and mystery, the Causeway Coastal Path stretches 52 exhilarating kilometres from Ballycastle to Portstewart. A must-do for discerning hikers, it offers towering cliffs, secluded beaches and numerous historic landmarks along with incomparable views to Rathlin Island and a surreal Scotland coastline. Starting tamely from Ballycastle, it reveals its glories beyond Carrick-a-Rede. One treasure follows another: Ballintoy Harbour, the glistening sands of White Park Bay, Portbradden, Dunseverick Castle, magnificent Benbane Head, the incomparable Giants Causeway and the architectural wonder of Dunluce Castle. Certainly, an outstanding two-day adventure ideal for staycationers. Information: causewaycoastway.com

Get your own stack
If extreme challenges are your thing, then sea stack climbing is certain to float your boat. Isolated in a turbulent ocean, the great sea pillars off west Donegal remained unclimbed until Iain Miller recognised their potential. His company, Unique Ascent, offers thrill seekers an opportunity to top out on one of Ireland’s most iconic sea stacks as part of an adrenaline-rich experience.

Your adventure begins by crossing open ocean by kayak or dingy to reach the base of the towering stack. Then, it’s up the great pillar while safeguarded by a rope to gain the tiny summit. Surrounded here by a nothingness of ocean and space, this is likely to prove one of your most surreal and unforgettable experiences. Information: uniqueascent.ie

Conquer Ireland’s iconic ridge
Seeking quality ice-climbing, Kerry men Con Moriarty and John Cronin ascended the northeast face of Carrauntoohil in 1987. Astonishingly they discovered a previously unknown ridge they christened Howling. Little did they know then that this ridge was destined to reach iconic status making it a rite of passage for walkers transitioning from the relaxing endeavour of upland rambling to the knee-quivering intensity of vertical rock.

To ascend Howling safely you need know-how and this is provided by Kerry Climbing. Over an intensive day on the MacGillycuddy’s Reeks you will learn rock climbing techniques and ropework. Then, on day two, you make a guided ascent of Howling with the pleasure of continuing onwards to celebrate your achievement on the roof of Ireland. Information: kerryclimbing.ie.

Trawl the wall
The Mourne Wall was constructed over a century ago to enclose the catchment area of the Silent Valley reservoir. Bereft of its original purpose due to modern water filtration processes, there is still something delightful in the way it mimics the Great Wall of China by undulating 35km over the finest Mourne peaks. Tagging its entire length creates a memorable outing and this is one you can DIY, as the wall offers an infallible navigational guide. Be cautioned, however; this challenge involves 3,000m of ascent, so aspirants need to be fit and well equipped. Possible to complete in one long 10-12-hour stint, the best approach for most is two, less demanding, days with one unforgettable night spent camping wild among the High Mournes. Information: walkni.com

Ireland from head to toe

The 640km Malin to Mizen Cycle is one of the epic Irish challenges, but traversing the island from north to south requires considerable determination and bike fitness. You can, of course, complete it alone, but it’s more fun with a group. One worthwhile way of gaining camaraderie is by joining a charity cycle. Here, you will need to get yourself up to the required fitness and raise a prescribed amount for the charity, which can actually be fun if you enrol your friends to help. Among the charities offering Malin to Mizen in 2021 are Cystic Fibrosis Ireland (cfiireland.ie); Marie Curie (mariecurie.org.uk); and Cycle against suicide (cycleagainstsuicide.com).