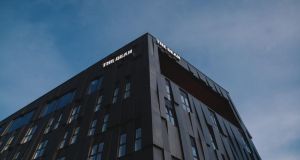 In a year in which our passports have felt like relics from a bygone age, the Dean, a new “design-led” Irish boutique hotel, will be hoping that a visit could be just the get-away-from-it-all tonic that a lot of people are looking for.

The 114-bedroom hotel, next to Kent Station in Cork city, opens its doors tomorrow. The jewel in its crown is Sophie’s, a rooftop restaurant, six floors up, with panoramic views over the River Lee and the city. The 230-seat restaurant features an open kitchen, so diners can watch the chefs in action. It helps with coronavirus precautions that there’s a heated covered terrace at the back of the restaurant. (All of the hotel’s 120 employees have been trained to work within Covid-19 regulations.)

The Dean, which is operated by Press Up Hospitality Group, says Sophie’s will be serving a New York Italian-inspired menu that combines favourites from its sister hotel in Dublin with new dishes created using local ingredients and suppliers, including crab from Castletown Bere, butter and yogurt from Glenilen Farm, in Drimoleague, and cured meats and cheese from Gubbeen Farm, near Schull.

Light dishes will also be served in the hotel lobby, alongside coffee, tea and pastries. A hot-desking area features fast wifi and an abundance of sockets.

The walls of the hotel, including its bedrooms, are hung with more than 400 works by Irish artists, including Domino Whisker, Shane O’Driscoll, the Project Twins and Leah Hewson.

A gym, pool, sauna and steam room will open in January – in time for any fitness converts who have piled on the pounds over Christmas.

The Dean, which also has three function spaces, says bookings are strong for both the restaurant and accommodation. “Sophie’s restaurant is almost booked out,” says Colette Walsh, the hotel’s head of sales, who is showing me around. “It is absolutely flying. The interest is unreal. For December at weekends, from Thursdays to Sundays, we are booked out. We have midweek availability. For accomodation we are fully booked on Fridays and Saturdays in December, but we have plenty of availability midweek.”

No Dean hotel would be complete without a swing: it was at the Dublin Dean, in 2015, that the former Fine Gael TD Maria Bailey had a mishap with its swing. In fact, when the architect for the new hotel appeared before Cork Circuit Court last week, to secure its licence, the State Solicitor Frank Nyhan had just one question: “Where is the swing?” The hotel says its swings will be in place in a matter of weeks.