The airline denies Which? Travel claims that it is ‘putting profits before safety’ 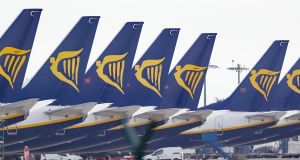 Ryanair has rejected claims from the British consumer watchdog Which? that it is putting profits above passenger safety and flouting aviation safety guidelines issued by the British authorities.

Which? Travel claims Ryanair and smaller low cost carrier Wizz Air are both “flouting recommendations from the [British] government designed to reduce interaction and avoid transmission of coronavirus on board their planes”.

UK guidelines call for airlines to offer a reduced food and drink service and limit the sale of duty-free and other non-essential items.

The British authorites told Which? that the purpose of limiting trolley services was to reduce the risk of transmission of coronavirus by limiting interaction between passengers and cabin crew which, it said, was in line with European Union Aviation Safety Agency (EASA) and the International Civil Aviation Organisation guidance.

Ryanair, which will increase its flights from both Ireland and the UK from the beginning of next month is continuing to sell food and drink, although it offers only pre-packed items.

The British guidelines also say airlines should advise passengers to limit the amount of hand luggage they bring on board and has urged the airlines to incentivise customers to check in bags instead. It says that limiting hand-luggage will mean passengers can board quicker and avoids them walking up and down aisles searching for overhead locker space, potentially spreading infection.

Wizz Air rejected the claims made by Which? Travel and insisted it was fully compliant with all local and international health guidelines. “For the airline’s onboard services, all products are packaged and all payments are encouraged to be contactless,” said a spokesperson. “Passengers and crew are required to wear face masks, with crew also required to wear gloves.”

Ryanair dismissed the official advice as ‘rubbish’ and a spokesman said the airline “sets a maximum number of bags allowed into the cabin, which ensures that the boarding process speed is not affected.

“We are encouraging extra cabin bags because this reduces the risk of Covid-19 compared to the /[British Department of Transport’s/] idiotic advice to maximise checked-in bags, which pass through eight different sets of hands and significantly increase the risk of Covid-19,” he said.

Ryanair also denied it was putting profits before safety, claiming that it charges more for checked in bags than for a second cabin bag.

The editor of Which? Travel Rory Boland said it was incredibly concerning that airlines “would put the health of their passengers and their own crew at risk by ignoring important government safety guidelines”.

He said it was “essential that airlines take the risks of infection seriously to give passengers the confidence to fly again once the [Foreign and Commonwealth Office] ban on non-essential travel is lifted. As neither of these airlines do well in our customer satisfaction surveys, we suggest passengers use other carriers that they can trust to put their safety over making a few extra quid.”

In a statement sent to The Irish Times, a spokesman for Ryanair said the company would not follow the Department for Transport (DfT) Covid guidance “which is rubbish. The DfT are still promoting their useless form filling at arrival airports, which delivers no quarantine benefit whatsoever. Thankfully our customers are also ignoring the DfT’s useless guidance.”

The statement said that “Which?’s false claim that ‘Ryanair is putting profits before safety’ is – as always – wrong because Ryanair charges more for checked-in bags (which we are actively discouraging) than we do for carry-on.”

The spokesman said the airline had reduced its in-flight service “which will be confined to pre-packed products (bottled water, foil wrapped food, etc), which many of our customers correctly consider to be essential. Perhaps the DfT and Which? suggest we should starve or dehydrate our customers on two or three hour flights? Neither Ryanair, nor EASA nor the [European Centre for Disease Prevention and Control] are following any of the idiotic guidance produced by the DfT during the Covid-19 crisis without consultation with the industry”.