Even my American friends were baffled. ‘What’s there?’ they all asked. A lot, it turns out 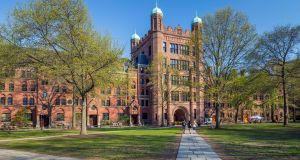 Yale University, whose alumni include more than 20 Nobel Prize-winners, is located in the gritty city of New Haven, Connecticut. Photograph: iStock

Our flight destination in the US is to Bradley International. That would make an excellent pub quiz trivia question: in which US state is Bradley International Airport located? The answer is Connecticut, and the nearest city it serves is Hartford, a name you possibly aren’t familiar with either. The tourism people in Connecticut want to change all that. The flight from Bradley to Dublin is the only direct transatlantic flight from Connecticut, and while the Ireland-bound legs are doing roaring business, the same is not yet true of the reverse.

Connecticut, it is fair to say, is only slightly overshadowed by its more glamorous neighbours, New York state and Massachusetts. Even my American friends were baffled to hear I was going to Connecticut. “What’s there?” they all asked.

Well, quite a lot, actually. Yale University, for starters, which you’ll definitely have heard of. Yale, whose alumni include more than 20 Nobel Prize-winners, is located in the gritty city of New Haven. The student-led tour we went on brought us around the red-bricked campus, and, as we passed a game of Frisbee, she told us that this familiar object had in fact been invented by a Yale student. Apart from the thrill of being in such close proximity to so many brains, the highlight of the tour is a visit to the university’s glorious Beinecke Rare Book and Manuscript Library.

Built in the 1960s, and designed by Gordon Bunshaft, a partner in the Skidmore, Owings and Merrill company, this library is a deservedly famous piece of architecture. It’s a giant cube, within which stands a glass tower of rare books. The exterior walls are made of translucent Vermont white marble panels, which means that when the sun shines, the marble glows. I don’t know how Yale students get any work done with the distraction of staring at the illuminated walls of one of the world’s most beautiful libraries.

If Yale is high-brow, the New Haven Elm City Party Bike experience is the most low-brow fun you can have in the same city. This is not a Dublin Bike, people. This is a kind of giant velocipede centipede, powered by many pumping legs; a kind of bike-tram, which does about five kilometres to the hour and makes people say gleefully rude things as you pedal past.

We were being guided on the Taste of New Haven Food and Drink Tour – basically, a tour around some high-profile eateries. In a country where restaurants sometimes have the life span of a hailstone, Frank Pepe’s Pizzeria is an oak tree, operating in the city’s Italian quarter since 1925. We watched the signature White Clam Pizza being cooked in a giant coal-fired oven; freshly-shucked clams are scattered on top of mozzarella, garlic and oregano. It is justly famous, and from time to time, I find myself craving another slice.

Good as the pizza was, the stand-out restaurant food and experience I had all year was at the last stop on our communal bike-ride. Miya’s Sushi calls itself “the first sustainable sushi restaurant in the world”. It’s the most unusual and memorable sushi place I’ve ever been in, because the restaurant’s creative ethos is to use only plants, edible weeds and invasive non-native species.

You may have seen signs as you drive through rural Ireland warning the public not to cut the Japanese Knotweed noxious weed that can literally undermine buildings (cutting it spreads it faster). In Miya, the leaves of the weed are served up deep-fried and studded with chilli; an astoundingly delicious snack.

There was sushi with tiny fingernail-size Asian Shore Crabs atop them, and more sushi with Chesapeake Bay Blue Catfish; both of these are invasive pests that Myia’s has transformed into sustainable and terrific food. Everything was served either on natural flat stones or pieces of split log, with re-useable tableware. It was a fascinating and unique experience.

Connecticut is full of lovely small towns with white picket fences and white clapboard houses that look like generic film sets. Stone bridges bracelet over rivers. The countryside is pretty and completely laid-back: we stopped at one rural pumpkin farm that had all its wares laid out like orange suns, and not a person in sight to take your money, should you wish to buy some.

Even the names of the towns have a fictional element to them – Mystic, for instance. It sounds as if it should be inhabited by witches and druids, but it’s become most famous for the pizza restaurant with the same name as the movie: Mystic Pizza, which starred Julia Roberts. The restaurant is still there, and still selling pizza. That’s if you can get in the door with the number of people taking selfies under the Mystic Pizza sign over it.

The Mystic Seaport Museum is in the same town. Part of it is like Bunratty-Folk-Village-On-Water, with its recreation of a 19th-century seafaring village. Like Bunratty, the buildings were not originally in this location, but they are all authentic. They were moved there from various places around New England, and many contain small businesses, with real craftspeople demonstrating period trades, such as barrel-making.

The star of the many fascinating exhibits here is the old wooden whaling boat, the Charles W Morgan, which you can go aboard. The subject of whaling is now controversial in our modern society, but there was a time when the American whaling fleet was almost 3,000 in number. This ship, the Morgan, was launched in 1841, 10 years before Herman Melville published Moby Dick.

To climb the narrow wooden stairs into the belly of the Morgan is to get some idea of how claustrophobic and challenging the conditions the crew of 35 faced every day. The smell below deck can only be imagined: blubber was converted into whale oil on board. It’s an extraordinary piece of social and maritime history.

One of the oldest attractions in Connecticut – bearing in mind that “old” is a relative term in the US – is the Essex Steam Train, in Essex. Running for almost half a century, you can sit in a 1920s’ Pullman revolving armchair and watch the gorgeous Connecticut River Valley scenery go by for the 2½ hours the journey takes. Fancy a Manhattan or a Bloody Mary served to your seat? Don’t mind if I do, thank you, gregarious on-board barman. I don’t know whether it was the Bloody Mary or the lush, tranquil scenery, or the lovely period atmosphere of the beautifully-restored steam train, but it was the most relaxing morning I’ve spent in ages.

Mid-century modernism in the form of architecture came to the Connecticut town of New Canaan in a big way. More than 100 houses were built in this style in and around New Canaan, and the most famous of them all is one called The Glass House. It was built by architect Philip Johnson for his own use, and is now open to the public.

Invisible from the road, the house, a radical build for the 1940s, is essentially a stunning glass box, as dramatic as a theatre set. There are also ancillary buildings: including sculpture and painting galleries, and a study with chairs designed by Frank Gehry. The Glass House itself can be rented privately overnight – for a steep fee. For two people to stay overnight and host eight others to a catered dinner in the house is $30,000. Now that’s something to put on your list for when you win the Lotto.

Rosita Boland was a guest of Bradley Airport, Aer Lingus and Connecticut Tourism

Taste of New Haven Food and Drink Tours are organised by ElmCityPartyBike.com, for groups of between eight and 15 people over two hours.

Millwright’s Restaurant, Simsbury, millwrightsrestaurant.com, is in a restored sawmill overlooking a scenic millrace.

Delamar Hotel, West Hartford, delamar.com, is a modern boutique hotel with bold and striking design and a wow-factor lobby with several pieces of original artwork. Guests can avail of the hotel’s flashy gull-wing-doored Tesla and driver for short-range journeys within the city.

Michael Harding: The faster I read, the more gin I downed
7