Is it possible to feel real culture shock in our globalised world?

Long Road Home: To me, it is more than not understanding the language. It’s about what feels familiar 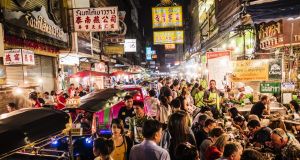 In a world where you’re as likely to see a Starbucks in Shanghai as in Seattle, and life back home is held safely in a smartphone in your pocket no matter how far away you are, what does it mean?

Culture shock. In a world where you’re as likely to see a Starbucks in Shanghai as in Seattle, and life back home is held safely in a smartphone in your pocket no matter how far away you are, what does it mean?

It’s about more than not understanding the language (or the symbols that make it up), or local customs, although that’s a part of it. To me, it’s about what feels familiar. Touching down in Bangkok last October felt monumental, but that was more of a personal thing. In fact, the machines and maps of the public transport system actually felt quite universal. Flashes of the reliable McDonalds fluorescent glow zipped by through the Bangkok Skytrain window from the airport, making parts of the city feel already known to me.

Even ornate gilt shrines to the Thai king on every street corner, or being brushed past by groups of Buddhist monks swathed in orange robes couldn’t altogether erase the knowledge in the back of my head that if I really wanted a Big Mac and Diet Coke, I could get one fairly handy.

This isn’t a negative comment on Thailand - the busier parts of the country are merely a reminder than globalisation has made our vast world smaller, for good and bad. Even when I arrived at the tiny port in the paradise island of Koh Phi Phi a few weeks later, a McDonalds greeted me just a few metres from the ferry. Ah, I thought. You again.

I felt more culture shock when I went to Myanmar from Thailand than I did coming to Asia from Ireland in the first place. Facing the oven heat of Yangon, where the men wear ankle-length longyis tied at the waist like sarongs, and women paint their cheeks with a yellow paste called thanaka, you immediately get the sense that Big Macs are going to be thin on the ground. Toto, I’ve a feeling we’re not at the Golden Arches anymore.

Yangon is a burst of colour and life. Chewed betel nut leaves blood red spit on the ground and in the teeth of passers-by. Markets bustle as live chickens are plucked and killed at the roadside. Women carry trays aloft on their heads. Generators and gridlock traffic purr together in a loud hum. It’s hot, chaotic, overwhelming… Whatever it is, it’s not familiar.

I was due to spend about a week in Yangon alone before heading to Lake Inle to meet a friend. I wrote a list of places to sightsee solo: splendour at the Shwe Dagon Pagoda, the colonial legacy of the Strand Hotel, the military’s eerie spectre in the Drug Elimination Museum.

First on that list was the loop train, which takes three hours end to end, and shows you a cross-section of the city and its sprawling outskirts. I think this was an attempt to get my bearings in Yangon; a concept I soon came to see was futile in a place like this, at least in a paltry few hours.

An early stumbling block was finding my local station, because to my eyes it simply didn’t look like one; its roof made from rusting sheets of corrugated iron, open to the elements, fellow waiting passengers lying on the ground on bits of cardboard.

People recommend you take this train to see “all walks of life in Yangon”, but I quickly gathered that’s simply a mealy-mouthed euphemism for abject poverty. We pass a toddler in dirty clothes with no shoes by the tracks. We go by scavengers in a skip, digging in rubbish with bare hands. Iron-roof shelters become broke-down shacks as we ride, supported by planks and poles, roofs made from leaves, tyres lounging at open mouths of shanty markets.

A washing line created by a stick slung between branches, farmers harvesting in fields submerged to their waists, rafts of pollution stacked high. Drifts of scrap metal and the smell of burning. A patch of plastic thatched itself and knitted into the ground, covering it like St Bridget’s cloak. Interested, kind locals ask me: “What are you doing here?” Faced with this curiosity, I was no longer sure myself.

On the train I realised culture shock is, for me, looking at your surroundings and finding it impossible that everyday life at home could really exist. Home feels too far away, too different to even visualise, like a dream you already start to forget on waking. On that loop, it was hard to imagine the Skytrain, let alone a DART.

Back home, a train pulls into Connolly Station like it always does, but I can’t picture it.