Spicy, sweet and fruity, these hot cross buns are irresistible

Vanessa Greenwood: I love them halved, toasted and spread with lots of butter 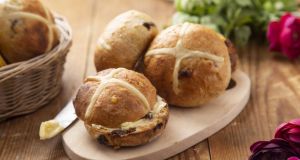 Their combination of spicy, sweet and fruity flavours makes hot cross buns irresistible. Eaten on Good Friday, they represent the end of Lent. According to one story, an Anglican monk baked the buns and marked them with a cross as a symbol of the Crucifixion of Jesus.

This recipe provides a step-by-step guide to making a sweet bun dough which is easy to shape into individual round buns. If you prefer a square shape, place the buns closer together in the baking tray, so they join up as they prove. This gives the characteristic tear-and-share effect.

They are leavened with dried yeast and can be made in just a few hours, provided you are working in a warm kitchen, which will encourage the dough to prove.

Originally, the white cross on top was created with two intersecting slits, which expanded into thick lines as the buns baked. Nowadays, the cross is added with sweet white icing or with a paste made of flour and water, which is simple to do.

Served hot and steaming, they make a delicious afternoon snack. My favourite way to eat them is halved and toasted under the grill, then spread with lots of butter. Once made and kept in an airtight container, these aromatic buns should stay soft and fresh for a few days.

Variation: The buns can be glazed with apricot jam instead of golden syrup and filled with currants or raisins instead of mixed fruit.

Method
First, warm the milk and add the dried yeast to it. Allow it to foam for five minutes.

Place the flour, spices, sugar, salt and diced butter in a large bowl. Rub the ingredients together with your fingertips to incorporate the butter to fine breadcrumbs.

Make a well in the centre and add the yeasted milk to the dry mixture. Mix until evenly dispersed.

Transfer the dough into a stand mixer fitted with a dough hook. Add the mixed fruit, lemon zest and egg. Mix for eight minutes, until the dough is soft and elastic (alternatively, turn the dough out onto a floured work surface and knead the dough by hand for 10 minutes, adding a little extra flour at the beginning if the dough is too moist to handle).

Bring the dough together into a ball. Place it in a clean, lightly oiled bowl and cover tightly with cling film. Leave the dough in a warm place (free from draughts) for about one hour, until well risen.

Once the dough has doubled in size, divide the dough into nine equal-sized balls, rolling each one to shape it into a ball. Arrange the buns on a baking sheet lightly dusted with flour (or lined with parchment paper). Cover with a clean damp tea towel and once again leave in a warm place to prove for 45 minutes.

While the dough is proving, preheat an oven to 220 degrees Celsius, or equivalent.

Once the buns have risen sufficiently, make the topping. Combine the flour and just enough water to form a thick paste and spoon this paste into a small plastic food bag. Remove the tea towel from the buns. Snip the corner off the bag and pipe a white cross over the top of each bun.

Bake the buns in the preheated oven for 12 minutes, or until golden brown in colour and hollow sounding when tapped on the base.

While they are still warm, gently heat the golden syrup and use it to baste the surface of each bun. Transfer the buns to a wire rack to cool.

It's crystal clear, making this soup is a job for the dedicated, or the deluded
9