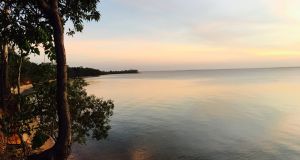 The oval cocoon of leaves is pulsating. Within seconds, a nest of green ants surges out. They spill out in vast numbers, justifiably angry that their home has been twisted off a tree. They inject darts of ascorbic acid into the arm of their attacker, our Northern Territory guide Dave McMahon. Battling the angry mob with one hand, McMahon opens a Thermos flask filled with hot water and crunches the whole nest inside. McMahon is a senior guide with Australian tour operator Venture North. He could also be Crocodile Dundee or MacGyver in his spare time. Once the flask is sealed, McMahon concentrates on swiping the escapees off his bare arms, wincing only slightly, shouting quite a bit and then tasting one, two, three of the escapees and encouraging us to do the same.

This wasn’t the bush tucker I’d been promised in Australia’s Northern Territory but it seemed rude not to taste it after McMahon’s selfless act. As directed, I touch the bottom of one of the ants to my tongue and get a hit of citrus. The ant contains a high dose of Vitamin C, which explains why McMahon wrestled them from the tree in the first place – mixed with hot water, this ant nest soup will form the basis of a cold’n’flu remedy for fellow travellers who are feeling under the weather after a long flight to Darwin. (FYI: We added herbs and the tonic tasted delicious.)

This is all part of McMahon’s day when travelling north from Darwin through the Northern Territory’s Top End. If you crave isolation, the Northern Territory is the place to go – it is the least populous of Australia’s states and territories. If you want even more isolation, aim for the Top End. To be even more remote, head to Arnhem Land in the Top End. Continue on and you’ll reach the Cobourg Peninsula in northern Arnhem Land, where we are travelling to stay at the Venture North safari-style camp. Travelling here is a privilege permitted by Aboriginal people, descendants of the oldest surviving culture in the world, who remain owners of the land. It’s not surprising to find that wildlife outnumbers people – across the 2,000km square of the Cobourg Peninsula, the population is about 40 people.

The waters around the Cobourg Peninsula form a conservation area that provides a home for numerous endangered species, including loggerhead, green, hawksbill and leatherback turtles. It is also one of the richest fishing areas in the world. On the land, it forms the Garig Gunak Barlu National Park and more than 280 bird species can be found here, about a third of Australia’s bird species population. They are joined in the trees by sugar gliders and other types of possums, while mammals such as dingoes, bandicoots, brush-tailed rabbit-rats and quolls prowl the ground, along with reptiles such as goannas and venomous snakes. Although red kangaroos don’t tend to make it to the Top End, the wallaby can be found. I am pretty sure the Northern Territory ratio of one crocodile for every two people is somewhat higher in Arnhem Land, but I decide not to ask.

Despite the small population, the Arnhem Land is rich in human culture, with tens of thousands of Aboriginal artworks across the escarpment that runs for nearly 100,000km. We take a dusty red track towards the Gunbalanya Aboriginal community to climb Injalak Hill, a rocky outcrop about 300km from Darwin. We slide and sidestep to the top of the rock with local rock art guide and artist Roland Burrunali, a member of the local Bininj community and without whom we would not be permitted to explore the area. “Most of the paintings here are 20,000 years old,” says Burrunali. “And in 20 years, they are gone.”

Images of crocodiles, echidnas, kangaroos, birds, snakes and fish are all colourfully entangled and painted in reds, yellows, blacks and whites on sandstone walls. The colours are remarkably well preserved, most startlingly the red which Burrunali tells us was usually a mixture of blood from the artist themselves, sometimes mixed with kangaroo blood. The other colours were made using berries and plants, all mixed in one of the many small pit holes that can still be seen hollowed in the rock.

The animals are accompanied by depictions of the “mimi spirits”, the spirits who taught the Aborigines how to survive in this harsh landscape. There are also depictions of Yingana, the Creation Mother. Between all of these, hand prints signify the unique signature of the artist.

For millennia these paintings have been part of the Aboriginal practice of storytelling, accompanying oral stories, songs and dance. Burrunali points to another and reiterates the 20,000-year-old date stamp. McMahon later explains that Aboriginal communities do not perceive time in the western sense and some paintings here are actually estimated to be 60,000 years old. For the Bininj, it is not their age that makes them sacred, it is their representation of traditional stories. Despite surviving for centuries, changing sun and rain patterns mean the artworks are now corroding at a increased pace.

Colourful rivers of paint criss-cross the yard in front of the centre, which is located in Gunbalanya, a settlement of about 1,200 mainly Kunwinjku-speaking Bininj residents, a short drive from Injalak. In the shade at the back of the building, one man adds dark detail to a didgeridoo, an instrument that was first created Arnhem Land. Beside him, another man outlines mimi spirits on a piece of intricately-designed bark. It is mostly bark and paper that are used to create artworks now, instead of rock. Inside, piles of dyed material fill a screen-printing room and weaving, traditionally created by women, hangs on the wall.

Tourists are invited to see the artists at work, learn about the artistic culture of the community and purchase the artwork. Each piece of art is signed and 80 per cent of the sale goes directly to the artist, with the remainder reinvested in art supplies and educational projects, with the aim of ensuring Aboriginal culture is maintained.

Over the next few days, we ponder this contrast of old and new as we experience a other contrasts. The Venture North camp is set on the cliffs on northern Arnhem Land. Brothers Hugh and Aaron Gange, from Shepparton in Victoria, lease the land from the traditional owners of Garig Gunak Barlu National Park and set up nine semi-permanent canvas tents, all with beds. There are shared bush-view eco toilets, solar-powered monsoon showers and a mess tent for reading and dining. This isn’t roughing it; it’s glamping with some of the best views in the world.

The water below sparkles, an inviting vista until you hear McMahon’s warnings: “Stay at least three metres back. Crocs are designed to dart out, grab and drag you back into the water in seconds. After that you’re a gonner with their underwater death roll.” It’s a warning that’s almost easy to ignore until you pause and instantly spot a croc cruising in the water. Within minutes three small sharks, numerous rays and countless colourful fish appear. Further out to sea there are dolphins, dugong and turtles. Sandy beachs, inviting waters, no swimming. Got it.

Over a pitfire, we prepare mud crab that we (okay, McMahon) caught with spears earlier in the day. We share fresh oysters pried from the rocks and steam cockles collected aplenty on a nearby beach. This is the bush tucker I was waiting for and it’s easy to collect and savour over our three-night stay.

We boat across Port Essington to see the fate of those who didn’t adapt so well to this bountiful but harsh landscape. For 11 years from 1838, this was the site of an attempted British settlement. In one of the hottest and most humid parts of the Top End, the settlers continued to wear heavy military uniforms, plant British crops and build houses with windowless walls and chimneys for indoor fireplaces. As well as scurvy, they succumbed to malaria, which was thought to be caused by bad air so the hospital was designed to have no airflow.

At the settlement cemetery the names of all the people who died are listed. This includes the names of every child born during those years. Two of the last three adults to die were the surgeon and assistant surgeon. The settlement was abandoned soon after.

Back at camp, under a starry sky that seems to extend forever and to the soundtrack of crabs and bandicoots rustling in the dry leaves and amateur didgeridoo playing, we ponder the sense of time – or timelessness – of Arnhem Land, her settlement stories and the cultural clashes that continue to exist on this ancient ground.