Upstate New York is a vibrant, verdant escape from the metropolis 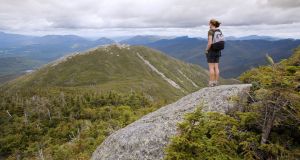 It was only as I flew into JFK that I started to really get to grips with New York’s green scene. As the flight path followed the Hudson River all the way down to Manhattan, I had a bird’s eye view over mountains, forests and lakes, long before any iconic skyscrapers came into sight. The eco experts who had pre-warned me had been right – if you really want to enjoy New York’s green spaces, you need to pack your hiking boots, water shoes and cycling shoes along with your Manolo Blahniks.

I had the luxury of three weeks to travel around New York State, often referred to as Upstate, in order to write an online travel guide to all that is green and gorgeous in New York. But rest assured, you don’t have to extend your city break by this long. Even a few extra days will take you into mountainous magnificence that is miles from Macy’s. So, if swapping timeless tranquillity for Times Square is your thing, read on.

The Hudson River is a great place to start. Taking a Metro-North train from Grand Central Station for just an hour and a half to the pretty riverside town of Beacon, I soon realised why this region was, in many ways, the pioneer of tourism in New York.

The Hudson River School was a mid-19th century art movement portraying wild and dramatic New York landscapes, and as I kayaked along the river, with Bald Eagles flying overhead, and under the guidance of Beacon paddling expert, Katie Behney of Mountain Tops Outfitters, I could imagine why these paintings must have enticed people out of the city in their droves.

Similarly close to the city is Long Island, the getaway of the flashy car and flashier wallet brigade. However, most of them head to the south coast of this peninsula, that actually stretches for nearly 200km and where the unspoilt north coast, on Long Island Sound, has a whole other real life feel to it. Again, all accessible by train on the Long Island Railroad, Long Island has a 300km network of hiking trails known as the Long Island Greenbelt, stretching out beyond the railtracks.

I benefited from an early morning guided hike through old pine forest, fecund with wild blueberries and huckleberries. This was followed by a canoe trip down the Nissequogue river, where I was told not to dip my toes in in case the snapping turtle gave them a nip. Despite my aforementioned water shoes, I considered it best not to mess with a New York turtle.

The other things not to mess with in New York are the mountains. I may have grown up hearing about the gangs of New York, but what they don’t tell you is that there are also bears in New York. And plenty of them, given that the Catskills mountains are just an hour from Manhattan, and the whole other world of the Adirondack mountains is about three hours away.

The latter is New York’s best kept secret, officially known as the Adirondack’s State Park. It is about as far from a park as you can imagine, given that it is bigger than Yellowstone, Glacier, Grand Canyon, Great Smokies and Yosemite national parks combined. So, if your heart jumps with excitement just looking up at the towering wonders of Manhattan, think of it as a mere starter to the entrees upstate. The trains don’t head up as far as the Adirondacks, but there are plenty of buses, with Trailways being your best bet.

The Adirondack hub is Lake Placid, but I chose to stay at the eco-certified Golden Arrow Hotel, on Mirror Lake, not only because of its eco chic chutzpah, but also because the lake is motor boat free, and I love to swim outdoors. Doing a lap of the lake with local hiking guide and mountain expert, Karen Delaney of High Peaks Cyclery, after a day in the hills, was a highlight.

Another way to explore the Adirondacks is the more hard core mountain-hut-to-hut style hiking, made possible by the mountain lodge or ‘loj’ movement, which has been kept alive by the Adirondack Mountain Club since the first one opened in 1890.

Because hiking is what New York State is all about. I was equally bowled over by this love affair with rambling in the Catskill mountains, closer to Manhattan and almost perfection in their beauty, swooping down to the ground, one by one, and overlapping each other in a way that resembles a child’s drawing of how mountains should look.

My final evening was spent kayaking Lake Wawaka with Jim Kelly, who runs Catskills’ Susan’s Pleasant Pheasant Farm with his wife. As we paddled placidly amid herons and turtles, listening to Jim’s stories of New Yorkers who had swapped the madness of Manhattan for this upstate utopia, I watched his eyes gleam with the sheer joy of life. Because he had got it right. This is New York life, Jim, but not as we know it.