Land of the giants: A wander through Cavan’s heartland 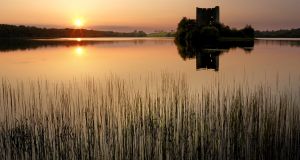 About 20 feet away, two “fishermen” float by in an inflatable boat. I say “fishermen” as having the equipment doesn’t necessarily mean you deserve the title. There are rods, but no fish visible, and little effort being made to change that situation. The two lads are mainly having an involved discussion about some recent night out. They look sinfully relaxed, and so they should be.

We are out on Lough Oughter in Cavan, where the water is flat and calm, and the sun is shining. I am part of a two-person kayak where we have divided the workload dubiously – I am doing the paddling while my wife is doing the directing. The only sounds are of nature, pikes splashing and herons diving. Around us, perfectly green drumlins rise intermittently out of the water, while in the distance a cylindrical castle ruin stands as an improbable sentry on a small island in the middle of the lake.

That building, Clough Oughter Castle, is our ultimate destination. Built somewhere around 1220, it was mainly a stronghold of the O’Reilly clan through the centuries. It is also famous for being the last fortified outpost to fall to Cromwell, presumably as he didn’t have any kayaks.

We got ours from Sean Thornton of the Cavan Adventure Centre (cavanadventure.com). Located on Inishmore, a short spin outside Cavan town, the centre gives you access to the entire surrounding water system, from where you can go as far as your arm muscles will allow.

It’s a family business and Sean’s daughter Siobhan was the one who expertly fitted us with our equipment on arrival. It’s striking too that after showing us the lay of the land on a map, she sanitises her hands seemingly without thinking in what is clearly a well-practiced routine. Even a business that practically trades on fresh air has to deal with the realities of the Covid world, with arrivals being pre-booked and staggered and the inflatable obstacle course having to be pulled from action completely.

The clientele has slightly changed too. “Yeah, a lot of people are coming to us and saying they should be in Spain,” laughs Sean, “but we are getting more on the radar. It’s very chilled out, you can really unwind. This is part of a Geopark, so it’s a sanctuary area for the wildlife. Powerboats and jet skis aren’t allowed on these waterways, it’s only for small crafts. It’s a hidden gem.”

We make it out to the castle and eat our packed lunch in a serene setting that is both like something from Middle Earth and uniquely Irish. The danger with holidaying at home is the temptation to try to recreate what you’d typically do on a foreign holiday. You are far better off embracing the singular things that Ireland does well.

Cavan is being promoted under the umbrella of Fáilte Ireland’s Hidden Heartlands, a moniker that can seem a little treacly at first and quite apt later – these gems are away from the beaten track, but are being presented with a lot of heart. What’s not to like?

The tasty fare was enhanced by the al fresco experience (amach san aer?)

And the locals are very proud of their surroundings. We stay at the Cavan Crystal Hotel in Cavan Town (cavancrystalhotel.com) and a number of the staff proffer suggestions of their favourite walks and cycles to take in the area. The hotel is a large enterprise but moves nimbly along new Covid guidelines, with the staff staying friendly and relaxed while strictly following the rules. It’s a tough tightrope to walk and one that all businesses will have to get a handle on.

We refuel that evening in Murph’s Gastro Pub (murphsgastropub.ie) in the picturesque village of Butlersbridge, just outside Cavan. Located by the river and set elegantly across from the church, their outdoor dining area was too sun-kissed to pass up, with the tasty fare enhanced by the al fresco experience (amach san aer?). Again the staff are very charming, which seems to be a theme in Cavan.

The following day we head off early to the Cavan Burren Park, on the slopes of the Cuilcagh Mountain outside the village of Blacklion (cavanburren.ie). It is located within a Unesco Global Geopark, which basically means it is considered a site of exceptional geological heritage (it is also one of only four transnational geoparks on the planet, as it lies on the border). There are a number of different ways you can enjoy the park.

Firstly, you can try to get your head around the mindbending timescale of the place. The oldest rocks in the park are thought to be around 900 million years old. At that point Ireland would still have been two separate land masses, but over the next 500 million years the two sections moved toward each other to create a colossal mountain range larger than the Himalayas. In Donegal. Too much to take in? If you prefer you can start with trying to imagine the area in 4,500 BC when the first farmers arrived in the area, with evidence of these settlements still visible in the park with monuments such as the Calf House dolmen (possibly the most Irish thing ever) or the Giant’s Grave wedge tomb.

Other tales include those of local agriculture, weapons production and sexually voracious swans

Secondly, if all that is too much to process, you can simply enjoy the many stories and myths that go along with the park, expertly told by our guide Dani. She explains how two giants, called Lugh and Lag, got into a dispute over which of them was more deserving of the hand of a local giantess. They agreed to decide the matter by means of a jumping contest, much like in the current Dáil, at an area now known as Giant’s Leap. Ultimately Lag fell to his death, before being buried in, yup, the Giant’s Grave. (The giantess’s name has been lost to time, which prompts much eye-rolling from my wife. “This might be more of a lust story than a love story,” Dani concedes.) Other tales include those of local agriculture, weapons production and sexually voracious swans – although it is probably worth pointing out these are not all the one story.

Thirdly, you can purely enjoy the sweeping scenery, with trails of various length and difficulty criss-crossing the park. It’s also worth noting how easy an outing this is post-Covid. Many of the other stunning local landmarks are suffering under the strain of visitors – the Marble Arch caves have to be pre-booked and there are active efforts to discourage people from visiting the Cuilcagh Boardwalk at peak times, as it is nigh-on impossible to socially distance on the boardwalk, despite being outdoors.

That evening we head to The Oak Room restaurant in Cavan town (theoakroom.ie), a place that everyone we mention our plans to nods approvingly of, in what we are already coming to realise is a very Cavan way. Again the impact of Covid restrictions is noticeable, but unfussily dealt with. Customers are encouraged to use the QR codes on the table to access the menu, and the number of seats in the building have roughly been halved, from 90 down to 54. While not ideal for the proprietors, for the customer this simply adds to the airy, relaxed feel of the place. And the food is sublime as well as locally sourced, with the beetroots coming from the chef’s own garden at home.

Before taking our leave of Cavan, we decide to push the weather gods to the limit and take on one more outdoor excursion, the Killeshandra loop (discoverireland.ie/cavan/killeshandra-loop), which is marked with such a carefree approach that navigating becomes an adventure in itself. Much of the walk offers tunnels of foliage for protection, but by the time we return to the village, the skies have opened and it is bucketing down. Rain may not be a uniquely Irish thing, but we do it as well as anywhere else.

Patrick Nugent was a guest of Fáilte Ireland, whose ‘Make a Break for It’ campaign is encouraging Irish people to explore their own country this summer. See discoverireland.ie

Why do we force girls to wear skirts to school?
8