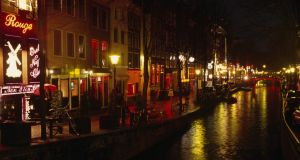 The red light district in Amsterdam: ‘Sometime it is as simple as tourists not realising that real people live here.’ Photograph: Getty Images

It is not a problem many holiday destinations spend much effort worrying about or money trying to fix: the wrong kind of tourist. But that is the challenge increasingly faced by Amsterdam, where visitor numbers have shot up more than 60 per cent in the past decade, bolstered by low-cost flights, cheap accommodation and the ease of travelling across open European borders.

With its centuries-old canals, vibrant historic centre and flourishing art scene, Amsterdam takes pride in its cultural riches. But there is a growing perception that some who come to the city are more interested in less high-minded pursuits – namely, marijuana and prostitution, both of which are largely legal – and may be doing more harm than good.

Other destinations have struggled under the sheer weight of visitors: the Galapagos Islands; Dubrovnik, Croatia; and Venice have all expressed concern about “overtourism,” with technology, including apps like Airbnb, often cited as a driver of the problem.

By shrinking the red-light district, the city has effectively given the area over to characterless shops selling tacky souvenirs or refreshments

But in Amsterdam, it is not just the number of tourists that pose a problem. It’s how they behave. Officials are trying to address the issue. Femke Halsema, the new mayor, visited the red-light district in the De Wallen section of the city in July, the month after she took office. Soon after, her administration announced a set of measures intended to curb misconduct.

They include on-the-spot collection of fines as high as €140 for public urination, drunkenness or excessive noise (enforcement agents will be equipped with hand-held devices to take card payments); rigorous street cleaning; and the hiring of additional “hosts,” or security workers in orange T-shirts, who are trained to give information and remind people of the rules, which include no drinking in the streets and no photographing prostitutes.

Perhaps most important, the city is also betting on a marketing campaign to persuade visitors to respect the city and its rules. Iain Mills, a 24-year-old Briton who recently traveled to Amsterdam with a group of friends, is the sort of visitor the city wants to reach. Having taken a low-cost flight leaving midmorning from London, Mills was enjoying a beer on a canal-side terrace by early afternoon.

The convenience of the trip was just one of the attractions, he said. “It’s not my first time in Amsterdam and won’t be my last,” he added. Mascha Ten Bruggencate, a city administrator who has been tasked with carrying out the new policies, said there was an obvious place to start. “The red-light district is symbolic of the problem,” she said. On a recent Saturday night, Stoofsteeg, an alley in the district lined by red-lighted windows, was so crowded with tourists gawking at the women on show that walking 50 yards or so took at least 15 minutes of pushing and shuffling. A couple with a stroller gave up after a few minutes.

Last year, 20 million tourists visited Amsterdam. During the busiest times of the weekend, as many as 6,000 visitors can pass through that alley – or attempt to – every hour, according to city estimates. Residents have complained that there are not enough police officers to guarantee everyone’s safety, and that De Wallen is now so overcrowded that ambulances have a difficult time reaching the injured or ill. Arre Zuurmond, the city’s ombudsman, described the scene as a lawless urban jungle, in an interview with the newspaper Trouw published in July. The prostitutes complain that the throngs of tourists deter paying customers.

Pim van Burk, 33, a corporate headhunter who lives above one of the brothels in the area, said that the noise do not bother him but that the crowds could make it difficult to get home. He said he had tried to solve the problem by installing a second bell on his bike. “That way, people think it’s more than one bike behind them,” he explained.

The city has taken aim at the red-light district before, notably with a decadelong urban development plan, called 1012, after the area’s postal code. The gentrification project, which concluded this year, included closing more than 100 brothels and dozens of coffee shops (where cannabis can be bought), and trying to bring different kinds of businesses to the area.

Critics say that the 1012 plan has had unwanted side effects: By shrinking the red-light district, the city has effectively given the area over to characterless shops selling tacky souvenirs or refreshments. “First it was the fight against prostitution, sex shops and coffee shops, and now it has changed to banning shops catering to tourists: ice-cream stores, even cheese stores,” Ten Bruggencate said.

Several measures to improve the experience of visiting Amsterdam were put in place starting in 2016, when the city first recognised that the tourist avalanche had downsides. Riding the unwieldy, multiple-person beer bikes (a kind of pub on wheels) into the city centre was prohibited, and a deal was struck with Airbnb to collect tourism taxes. Authorities also tried to limit the number of tourist buses parked in the centre of the city.

But the latest efforts go further. As well as the fines and increased presence of city workers on the streets, the ad campaign targets British and Dutch men ages 18-34. Those groups tend to visit the city to party, and they are a big part of the crowds on Friday and Saturday nights.

The ads use annotated images to remind visitors that drinking and singing loudly are perfectly legal in bars but will incur hefty fines if done in the street. Likewise, they promise to hit the pockets of those engaging in obnoxious behavior, such as public urination and littering.

“We don’t want to wag our finger at them, knowing this will be countereffective,” said Camiel Verhey, who is in charge of the campaign at the ad agency WaveMaker. “We just want to show them how to enjoy the freedom on offer.” Most of the ads have been placed online, focusing on sites where would-be visitors book flights, look for accommodation or check the weather. The campaign also uses Facebook and Instagram ads. And geotagging technology – which uses GPS to show a cellphone user’s location – helps push the messages to groups as they make their way to the city center.

The young men that the campaign is trying to reach tend to be on a tight budget, and city officials are hoping that reminders about the stiff fines and on-the-spot enforcement will help improve their behaviour. The city is also supporting a more low-tech approach, called “I live here,” a movement organised by residents who meet with tourists, run poster campaigns and generally try to raise awareness that not everyone who comes to De Wallen is there to drink and party.

“Sometimes it is as simple as tourists not realising that real people live here,” said Edwin Schölvinck, an organiser of the group and longtime resident of De Wallen. And while he acknowledged that some of the tourists needed to behave better, he said he did not want them to go away completely. “I like tourists, I like people coming here to have fun,” he said.