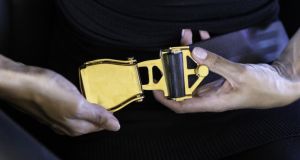 Clunk click: wearing your seat belt will help protect you from turbulence during a flight. Photograph: iStock/Getty

Very few people would have survived being partially sucked out of an aircraft, as happened to a woman aboard a Southwest Airlines flight from New York to Dallas on Tuesday. At first some wondered whether Jennifer Riordan, the 43-year-old mother of two from New Mexico who died in the incident, might not have been wearing her seat belt – but she turned out to have been strapped in at the time.

Even so, she was sucked headfirst through the window, from her seat in row 14 – one of those sitting over the wings – after it was blown out by shrapnel from an exploding engine: one of the jet turbine’s blades had broken off, with devastating consequences. Other passengers say Riordan was outside the aircraft – a Boeing 737-800 with engines made by CFM, the same combination of plane and turbines that Ryanair uses – from the waist up.

So why didn’t her seat belt save her? As one retired American airline captain told CBS News, if Riordan hadn’t been strapped in she would probably have been completely sucked out of the aircraft.

“You have an incredible amount of pressure trying to rush out of that small opening – it could literally suck a larger person – they could become so small, they go through that window,” Ross Aimer explained.

The air is so thin at high altitudes that aircraft cabins have to be pressurised – pumped full of air, essentially – so that passengers can breathe without having to use the kind of oxygen masks that fighter pilots wear. The result is that commercial aircraft are a little like balloons: puncture the exterior and the air inside rushes out. Unfortunately, Riordan was caught in the gush of escaping air.

Such incidents are extremely rare – Aimer recalled a similar one in 1973, and in 1988 an attendant was pulled to her death after a hole opened in the roof during a flight over Hawaii – and the passengers at most risk are those, like Riordan, sitting next to a window that breaks.

It’s an unpleasant truth that a belt across your lap is unlikely to save you if your flight crashes. So what are aircraft seat belts for? Their main purpose is to protect you during turbulence, which is why airlines prefer you to stay strapped in throughout your time aboard.

When an aircraft hits turbulence – which the US Federal Aviation Authority explains is “air movement created by atmospheric pressure, jet streams, air around mountains, cold or warm weather fronts or thunderstorms” – it falls through the air, with luck only a little but sometimes a lot. The passengers cocooned inside don’t fall at the same speed, so in extreme circumstances they’re liable to be hit, as they effectively stay in the same position while the cabin ceiling, for example, drops down towards them with the rest of the aircraft.

In the worst incidence of turbulence causing structural failure, all 251 passengers and nine crew aboard an American Airlines Airbus A300, plus five people on the ground, were killed in 2001. In that disaster, the first officer was found to have overused rudder controls in response to wake turbulence, or jet wash, from a Boeing 747 that had taken off shortly before it. He was so aggressive, according to investigators, that the vertical stabiliser snapped off the aircraft.

How to cope with turbulence

Clench your buttocks This is a distraction technique, to take your mind off the bumpy ride.

Write your name on a piece of paper with the wrong hand Again, this is about forcing yourself to focus on something else.

Suck on a straw If you feel like you might start to panic, avoid hyperventilating by sucking on a straw: it will restrict the flow of air to your lungs.

Book a seat at the front of the aircraft You’re less likely to feel any bumps here.

Imagine a flight where you’re enjoying the experience So drift off in your mind, for example, to one of those first-class pods with seats that lie flat, full entertainment systems and top-notch food and drink to hand.

Massage the pressure points in your neck and shoulders Or ask a passenger beside you to do it. You may make a new friend.

Avoid alcohol It only exacerbates feelings of fear.

Prepare for your flight Pay attention to the crew’s safety advice, and know how many rows you are from the nearest exit. If you’re in an emergency-exit row, be confident that you can open the door. (Should the oxygen masks drop from the overhead panels, be sure to put them over your nose as well as your mouth: many passengers aboard the Southwest Airlines flight got this wrong, exposing themselves to the thin air of the depressurised cabin.)

Ignore unusual sounds If you feel worried, ask the crew: they’ll probably know what caused it. And put your mind at rest: wings never snap off planes, all aircraft can fly on one wing, and even if both engines fail they can glide for up to 120km before needing to land.