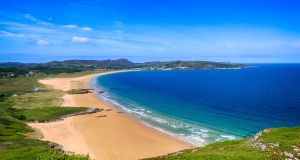 Ballymostocker Bay: a Blue Flag beauty that has wonderful views of the Inishowen Peninsula.

Lonely Planet has picked its top 10 beaches in Ireland, describing the 6,200km coastline here as a “beachgoer’s paradise”.

The travel-guide publisher’s selection of beaches ranges from “quiet coves” to “great stretches of golden sand”, most of them along the western seaboard, with Co Donegal and Co Kerry particulary well represented.

Killiney Beach, just south of Dublin city, is the only beach on the east coast to make the list, with the surrounding bay being described as resembling the Bay of Naples, in Italy.

The guide recommends visiting the beaches on a sunny summer’s day, running your hands through the soft sand and imagining yourself 20 degrees closer to the equator. Here’s the full list.

Lonely Planet says: “Separated by a dog-bone-shaped sand spit and tombolo are the golden sands of Gurteen Bay and Dog’s Bay, made up of dazzling white sand. Unlike other beaches, the sands are not formed from rocks but from crushed seashells, which give them more of a Caribbean feeling.”

“It takes a bit of effort to get there: from the arched bridge at the end of the inlet that marks the end of Killihoey Beach (another looker) you have to clamber through the wind-blown grassy dunes for about 15 minutes, but your reward is a two-kilometer curve so isolated and beautiful that you’ll instinctively want to keep the secret all to yourself.”

“Hemmed in on three sides by rocks that are part of the craggy Croaghaun Cliffs... Even allowing for the fickle weather and the moody Atlantic, Keem Bay is one of Europe’s most beautiful spots – its Blue Flag status barely doing justice to the stunning setting of it all.”

“The sand dunes at the back of the beach offer another bit of protection, atop which on a clear day there are unobstructed views to the north of the gorgeous mountains of Donegal. Offshore – and occasionally visible at low tide – are the remains of three ships that ran aground here during the Spanish Armada of 1588.”

“It faces west, which means there’s good surf here – in summer the local surf schools are busy teaching people how to stay up on its waves, which can get as high as 3m. If surfing isn’t your thing, Inch is also a big birdwatching spot, but ultimately it’s about a walk and a swim.”

“Thanks to the warming waters of the Gulf Stream a swim here isn’t the mark of madness, especially in those glorious September days when the sea is softened by a long summer, but even if you don’t fancy getting into the water there are some stunning views from the 10m-high dunes.”

“Trawmore is also one of the most photographed of all Irish beaches, especially from the vantage point of the Minaun Cliffs at the beach’s eastern end, which rise to a height of 466m and is the perfect spot to catch the beach at its best-looking.”

“Unlike the much more popular beach in Ardmore itself, Ballyquin remains relatively unfrequented: locals come here for morning swims while, in the evenings, it is a good spot for surf fishing, with locals casting a rod in the hope of catching some flatfish or a Bass.”

“Stretching for almost 2km from the holiday village of Portsalon (which gives it its alternative name of Portsalon Beach), this Blue Flag beauty has wonderful views of the Inishowen Peninsula.”

“As city beaches go, this one in the south Dublin suburb of Killiney is a treat... popular with swimmers, walkers, and families on a day out: on a fine day you’ll be in plenty of company, but the walk from end to end is one of the nicest in Dublin.”