How to visit Barbados on a budget 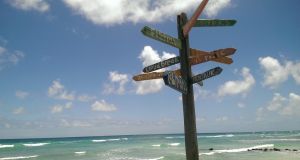 Back on dry land after our lesson it is time for a well-deserved beer. Hiding from the 30 degrees heat we look out at the view. 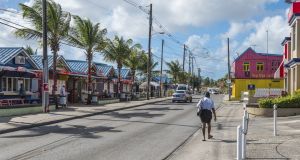 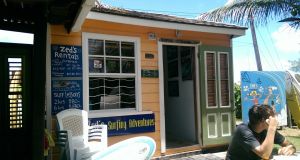 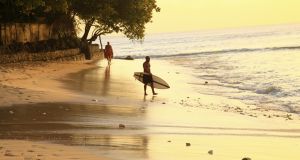 ‘Freights is like a lake today,” our surf instructor Bodie announces in his typically laid-back manner, as he manoeuvres the jeep around the sandy roads of Barbados’s south coast.

I picture Freights Bay, the beach we have surfed on for the past two days, its waters oscillating between turquoise and sky blue, waves that rise before falling like a breath exhaled. Where, occasionally, a turtle raises its head above the water as surfers straddle their boards chatting in the sun.

This has been our introduction to surfing, two girls who, prior to this trip, professed an incurable fear of the sea.

Yet, within half an hour of our first lesson, we were standing on our boards, gaining speed, learning to turn, paddling back out and beginning the process again. There were falls of course. “But out here,” Bodie reminds us time and time again, “falling doesn’t hurt.” And it doesn’t.

Bodie, a surf instructor with 25 years’ experience, has been doing all the hard work: looking out for appropriate waves for us beginners, reminding us of the advice he gave us while on dry land, pushing us on our boards as the waves approach and shouting instructions, encouragement and constructive criticism. We hear little of the latter as we whoop our way in, but we keep paddling back out to take it all on board.

But, two days in, there are no waves at Freights and it’s time to get serious.

So, we are off to Surfer’s Point. This poses a few issues for us. Firstly there are actual waves here. Although we can still stand in the water, here the sea is much rougher. Two days of surfing in Irish skin means the back of our legs are burned and sore.

There are also many more people surfing in a smaller space, so Bodie reminds us of the evasive strategies he taught us on day one. “Duck underwater, your hands on your head to protect yourself. Come up with your hands pointing above your head.”

Within 20 minutes I have to make use of this advice. A learner in his early teens falls from his board, which darts dangerously towards my face. I go under and emerge unscathed. Paddling back out I am constantly jostled by the waves and feel exhausted when I make it back to our starting point.

And then a wave approaches and I forget anything other than the desire to get up on the board and ride to shore. In short, I am a surf convert (without a single utterance of any surf talk . . . dude).

Back on dry land after our lesson it is time for a well-deserved beer. Hiding from the 30 degrees heat we look out at the view. It’s as you’d expect: coconut palms swaying over white sands. It may be a cliche but here, on an island roughly half the size of Louth and smaller than the Isle of Man, this is a constant backdrop. It is the sight that greets us from our balcony in the morning, that jumps out at us from the gaps between the shops in the coastal town of Oistins or from behind the pastel houses that cover the island.

So activity, check; afternoon beer, check. Now, where to eat? On this, a tiny island where fish is king , we find ourselves returning time and time again to the fish fry in nearby Oistins.

Located next door to the fish market, every menu boasts roughly the same fare: mahi mahi (known as “dolphin” locally – don’t be alarmed), kingfish, marlin, snapper, jerk chicken and spare ribs. Sides on every board include macaroni pie, potatoes, salad, breadfruit and plantain.

We eat at shared tables watching the fish-sellers and stall-holders vie for the business of passersby. Nearby a karaoke bar emits a racket reminiscent of two cats fighting. Fine dining it ain’t, but the food is invariably good and occasionally excellent.

Of course you don’t have to live frugally on Barbados. On the manicured west coast, where the waterfront is dominated by resorts – such as the Irish-owned Sandy Lane – and the mansions of the rich and richer, there are plenty of ways to spend money. But it is possible to get by on much less while having an occasional higher-range treat.

To help us explore the island – and check out Sandy Lane – we rented a car. The cheapest we could get was $225 BBD (€100) for two days, after which we had explored every coast and a lot of off-roads in between. But it is possible to circumvent this cost with clever use of the frequent minivans, which cost just $2 BBD (€0.90) for hopping in and out of town.

There are also self-catering options: Moonraker Surf Lodge (moonrakerbarbados.com) on the island’s southern coast provides self-catering rooms and apartments priced between €125-€160 in high season (two-bed apartment, could sleep five). Smaller one-bedroom studios on the ground floor are €90-€120. Go for the first floor option for more space and a view.

Breakfast is available at the bar – Surfer’s Point – but save your dollars for happy hour there and stock up on supplies in the supermarket to keep your costs low. Out on the surf, things are a little more expensive. Join a two-hour group class with Bodie’s School of Surf (barbadossos.com) for €60 per session, or book a private group (of two to six people) which costs €70 per person. Prices are in US dollars so change depending on the exchange rate.

There are other sights and activities too: rum and chocolate makers provide guided tours, taking tourists through their processes; a surprising number of riding stables dot the island; and windsurfing, kitesurfing, stand-up paddling and sailing packages are all available.

On our last evening we take our shop- bought bottles of Banks beer and walk west along the coast, passing the evening fishermen, waving, chatting. We perch on rocks, watch the sky change colour as the sun retreats and talk about our trip.

See here’s the thing about Barbados (as summed up by surf sage Bodie): “You don’t need that much to be happy here.”

The island may be a playground for the well-to-do, but it’s also a place that values the simple pleasures.

Where “Bajan time” (think Irish time squared) is the norm. Where strangers converse free and easily. Where paradise is close at hand.

‘I make myself small and stay quiet’: Experiences of racism in Ireland
9