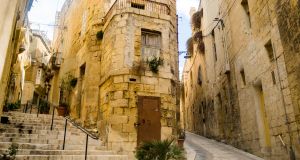 The narrow streets of the Collachio – the ancient part of the city – in Vittoriosa, which is full of charming houses and auberges, framed in colourful bougainvillea, oleander and jacaranda. Photograph: Getty Images

I fell in love with Maltese stone on my first visit in 2012. The buttery tones of Valletta’s sculptural edifices warmed my heart; I had never realised this tiny island contained such awesome architecture, mainly constructed from Globigerina limestone. It is no wonder that it will be European Capital of Culture in 2018.
I had always thought of Malta as a budget-package sun-holiday destination, and I’m not a fan of packages or sunburn. But when I flew there in 2012 to set sail from St Julian’s Bay to Sicily, I caught a glimpse of some intriguing, monumental fortresses that tempted me to return.
Luckily, Dublin man Stephen Place fell in love with a Maltese girl. He was running a private tour business in Wicklow and one day a party of 14 Maltese women turned up – a little spark ignited with one. That was seven years ago and now he is married to Liz and has established a bespoke tour business between Malta, Gozo and Sicily, called “My Maltese Guide”.

His company employs specialist guides who focus on your preferences, chauffeur driven all over the island, so you can cram in as much as you like.
I take a direct Ryanair flight for a three-night exploration of this legendary rock in the Mediterranean, once known as the “medical” or “nursing” island, as it was ruled from 1530 to 1798 by the knights of the Order of St John.
I arrive at midnight after a four-hour flight and am taken straight to my hotel, Le Meridien in Balluta Bay, on the outskirts of Valletta. The streets here are lined with magnificent 19th-century houses and up the backstreets, little Moorish terraces.
After breakfast, my guide, Miriam, arrives to show me my itinerary. I had specified my interests include local culture, archaeology and historic architecture, and that I love to swim in the sea. The latter was to be the most challenging wish.
We start with a stroll through the narrow streets of the Collachio – the ancient part of the city – in Vittoriosa, which is full of charming houses and auberges, framed in colourful bougainvillea, oleander and jacaranda.
Each doorway is so unique and eccentric that I surprise Miriam by constantly stopping to photograph them. We may think tourists are odd photographing our Georgian doorways – I get it now.
We come upon the very busy marina, berthing lots of Irish yachts, and make our way up to the gardens on Senglea Point where there is a spectacular panorama of the Grand Harbour and Fort St Angelo.

With the midday sun starting to sear, it was very convenient to be booked into the nearby Hypogeum of Hal-Saflieni, a Neolithic underground temple dating from 3,300 to 3,000BC. If Pompeii, Herculaneum and ancient secrets are your thing, then you need to book this visit three months in advance. The Hypogeum is a unique monument, and a significant example of rock-hewn architecture, where natural cavities were sculpted in imitation of temples, as repositories for bones of the dead.
Only 12 people can access the monument at one time and anything that rare is worth a visit. On the other hand, the cathedral of St John in Valletta will be bustling with tourists gazing in awe at its extensive gold décor – also worth a visit, but don’t panic if you can’t get in.
There is an utterly amazing feature to behold in the new Renzo Piano parliament building and city gate. Built in the same warm stone but in complete contrast to the baroque, this latest addition to Valletta just makes you want to sit, sip and stare.

Speaking of sipping, it was time to eat. We head to the coastal fishing village of Marsaxlokk, and a pretty little restaurant, Tartarun, where we tried local prawn carpaccio, bruschetta with anchovies, home-smoked fish rillettes, calamari, teamed with coriander and lime mayonnaise – a new one on me – washed down with local rosé. The traditional Maltese dish is rabbit but I must admit, I avoided that one.
After a visit to the cliffs at the Blue Grotto, I regret I don’t have more time to take a boat ride there, but it’s always good to save something for the next visit. What I really wanted was a swim and we found a beach up north, at Golden Bay. It was still only mid-afternoon and on our return journey we visited the sophisticated Palazzo Parisio, with a charming garden for afternoon tea.
Malta was under Arab, Roman, and Norman rule through the ages. The Aragonese took control in 1282 and established the fortified city of Mdina. Ambling along its winding streets, I find intriguing doorways into ancient buildings that house elegant restaurants with tables in orange groves that would make you wish you had a month instead of a weekend.
For dinner that evening, I am joined by Stephen Place at Madliena Lodge, overlooking the sea. It is a lovely restaurant, full of character, with good steaks and local red wine. I can see why Malta is so popular with Irish tourists and tax residents, a conversation I overheard as I queued for my flight, was all about who was building what villa where – it was like being back in 2006.
There is a genuine cultural similarity with Ireland. Perhaps it stems from Catholicism; there are 359 churches between Malta and Gozo for a population of just 450,000.
In just one day I manage to see most of the island, including a vineyard. The island is about the size of Co Dublin, and nowhere appears to be more than 45 minutes drive.

Gozo the next day is just a quick spin up the road to the ferry, a short enough sail, passing an intriguing isle called Comino, the beauty alone of its coastline would make me put it on my next itinerary, and spend the day.
On Gozo, we tour the Castile – another magnificent restoration – and the markets and beautiful backstreets of the Citadella. We wander through unusual salt fields, and head to the coast for lunch at Il Kantra, a little restaurant on a cliff overlooking a narrow creek. It is part of Hotel Ta Cenc and where I manage to nab another dip in the sea. After a gorgeous lunch of spaghetti ricci (sea urchins) with my Gozo guide, Flora, I climb down on to the rocks, and step into the beautiful blue water. Gozo means “island of joy”. It definitely is.
Nearby, Sliema (the Dalkey of Malta) has a vast choice of bars and restaurants. My favourite is Barracuda, where the sea crashes against the rocks beneath the glass floor. I watch the sunset at the Exiles Club and think how much I would like to return – again.

Spring dresses to dream about, whether you like them wrapped, flirty or feminine