Taking the new ferry to Spain? Here’s what to see when you get there

New ferry service to Northern Spain will open up a picturesque, culinary, artistic part of Spain 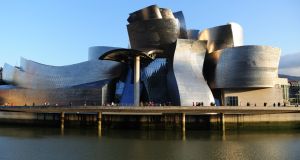 The announcement by Britanny Ferries that it is to begin a ferry service from Cork to Santander will not be the first time Irish travellers have taken this route to northern Spain. Centuries ago, a traditional route from Dingle to Spain formed part of the journey for pilgrims on the Camino de Santiago. Once again, they can begin their pilgrimage in Cork, on Brittany Ferries’s MV Connemara from April.

Northern Spain, which is also known as “Green Spain” is one of the least developed areas in that country for tourism, despite its popularity among Spanish and French families, who flock there in summer. The cities and towns of the coast are very sophisticated and renowned for fine food.

Stay in a parador

The northern coast has some finely restored properties in stunning destinations. The parador at Gijon is in the city and overlooks the Bay of Biscay.

Santillana del Mar is a short distance from Santander and a good spot to begin you trip. It is a modern, three-star property and prices range from €85 - €115 per night.

The parador at Limpias is a former palace and has lovely vast gardens with indoor and outdoor swimming pools and tennis. It is a good location for exploring the caves and small villages of Cantabria, €80 - €130 per night.

The parador at Hondarriba was built in the 10th century and is known as Castle of Charles V. It is an authentic medieval fortress. Hondaribba is a good spot for exploring nearby San Sebastian.

The paradores of Spain can be booked through Map Travel, and there are often special offers and group tours, maptravel.ie. Some of the Paradores offer a discount of 15 per cent to pilgrims on the road to Santiago.

Santander is known for great food, and the beach is on the doorstep. Though the weather is a little milder and wetter than other areas of Spain, you can still swim in the sea in summer.

This city is the jewel in the crown of northern Spain and the Basque country. Famous for its food, even the tiniest bar will have amazing tapas and wine at very low prices.

The beautiful town is set around sandy beaches. The film festival, from September 21st to 29th this year, is attended by the cream of Hollywood and the international film scene. The best hotel in San Sebastian is the Maria Christina. It has been completely renovated and tates are from €201 per night, starwoodhotels.com. For apartment rentals, see friendlyrentals.com.

The city is an homage to starchitecture and modern art, and the stunning Guggenheim museum is 20 years old this year. Another must see is an old wine warehouse, the Azkuna Zentroa (azkunazentroa.eus) has been totally transformed into a creative cultural and leisure space by architect Philippe Starck. There’s a cinema, exhibition rooms, cafe and shops but most enticing is the rooftop pool, where you can swim with incredible city views, and in which, thanks to its glass bottom, you can be viewed by people walking below.

Many of the region’s wine makers are clustered in an area of the Ebro River Valley. In summer the famous Batalla de Wino sees people sloshing each other with red wine. All the bodegas do tours and in some you and eat and stay.

Many of the vineyards in Rioja have embraced modern architecture and there are some stunning places to see. The Marques de Riscal has a five-star hotel on site.

The towering glass facade of Baigorri, designed by architect Inaki Azpiazu stretches seven-stories underground. The facility was designed for vertical, gravity-based wine making and you can view the entire process from one floor – the floors are all open in the centre so you can see each tier of the process.

The Northern Way section of the Camino del Norte begins in the elegant coastal city of Santander. The coastal walk will take visitors to Satnillana del Mar, Ribadesella and Gijon. The mountains of the north provide a spectacular contrast to the picturesque coastline and charming villages. Along the walk you will be able to indulge in superb fresh seafood and local produce, as well as tasting the traditional cider of Asturias.

The countryside of Asturias is very picturesque, particularly the Picos of Europe. The national park will celebrate its centenary year. Don’t miss Covadonga which is a fairytale spot in the Picos. It is also the 13th centenary of the kingdom of Asturias.