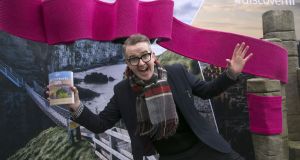 David Meade, mentalist and mind reader, floating above the Giant’s Causeway in Dublin.

On the day considered to be the gloomiest of the year, Discover Northern Ireland was stopping people on South King Street in Dublin on Monday to be cheered up by David Meade, who opened their eyes with some optical illusions and mental tricks at a display celebrating the North’s attractions.

David, a mentalist, TV personality and Northern Ireland native, certainly got me when he asked me to write on a piece of paper the name of someone with whom I would like to go to Northern Ireland. Amazingly, he guessed who it was as I said the alphabet.

“Buying a new phone or shoes or other treats will not raise our mood on Blue Monday,” said David. “What you need are experiences as they will last with you for a long time.”

David’s own favourite place in the North is Bushmills, Co Antrim, which draws his family time and again.

Explaining Monday’s event, Fiona Cunningham, Tourism NI’s Republic of Ireland market manager, said: “There is no better way to start 2018 than being transported to the number one hotspot for the year on a dreary Monday in January and being able to experience an inspiring destination on our doorstep.

“From Titanic Belfast to the Carrick-a-Rede rope bridge, there are many well-known attractions to visit, but there are also fantastic hidden gems to explore and a variety of activities to pack in to make a truly memorable short break.”

The event comes after Lonely Planet’s Best in Travel 2018 voted Belfast and the Causeway Coast the number one place to visit in the world. The region claimed the top spot because “it is deservedly now recognised as a must-visit destination by travellers from across the globe”, according to James Smart, Lonely Planet’s destination editor for Britain and Ireland.

He added: “Dynamic Belfast has put its troubled past behind it and is a city transformed, its streets packed with buzzing bars and great stories, while the coastline beyond boasts spectacular scenery and plenty of great diversions.”