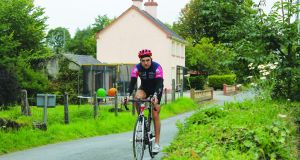 The route is a rough parallelogram. Great Road Routes by Dan MacCarthy, published by The Collins Press, 2016

This is a rural cycle in northwest Cork and is one of the most car-free routes in the guide. The route is a rough parallelogram. Millstreet’s claim to fame is that it hosted the Eurovision song contest in 1993.

Take the Claragh Road, which is to the right of the church. (Avoid at all costs the hectic R582 to Rathmore.) Cross the River Finnow and after 1km from the church the road swings right and traverses beneath an imposing facade of mountains: Claragh Mountain, Caherbarnagh and the Paps.

Several noticeboards from the rural development company IRD Duhallow inform the walker or cyclist of the flora and fauna of the region, including the delightful wheatear.

This road has a gradual climb and continues along just under the mountains for 13km. After 12km the road crosses the signposted border into Kerry.

By now the foothills of the gently contoured Paps have appeared. The hills are a favourite with hillwalkers but from the other side - the Clydagh Valley just off the Cork-to-Killarney road. The breast-shaped mountains are named for the mother of the Irish gods, Danú

After another 2km from the border swing right, heading north - the second side of the parallelogram. Pass a considerable bog on the right and arrive at a T-junction. Skirt briefly to the left and then right after 100m and the road passes Rathmore GAA pitch. Veering right, the road connects to the N72 Mallow-to-Killarney road.

Head right, or east, briefly. In just under 1km follow the signs to, for some, the unpronounceable, Gneevgullia. A toughish climb leads into the village. The village has a widespread reputation that belies its size, being the focal point for the Irish traditional Sliabh Luachra musical style. It is also the birthplace of the renowned seancha. Eamon Kelly, a statue of whom adorns the main street. It is a good spot to stop for refreshments.

Back on the bike and swing right (from the earlier approach) towardsthe next village, Knocknagree, on largely good roads. This is the third side of the parallelogram. Cross the mighty Blackwater River after 3km. The river rises about 10km north of this point at Knockanefune and for a stretch of around 20km forms the Kerry/Cork border. Push on to the spacious village of Knocknagree and depart to the east on the L1108 in the direction of Boherboy. Cross the Owentaraglin River, a tributary of the Blackwater and 2km thereafter head right at a T-junction. This is the final side of the parallelogram.

A pleasant cycle of 4km intersects the N72, which has to be briefly taken on. Go right on this seeming motorway before sanctuary presents itself across the road in the shape of the road for base. Millstreet lies 7km farther along on a largely characterless road, save for the railway crossing 1km from the town.

Start/finish: Millstreet, Co Cork. Park at the west end of the town.

An edited extract from Cycling Munster – Great Road Routes by Dan MacCarthy (The Collins Press, €14.99), available in bookshops and online from collinspress.ie