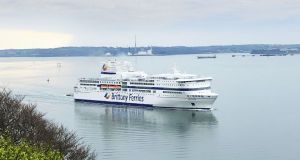 Brittany Ferries: customers are concerned about being offered vouchers instead of refunds for cancelled sailings from Ringaskiddy, in Cork

Brittany Ferries passengers have expressed concern at the way the company is managing summer bookings. The ferry operator says it is working on the basis that Irish holidaymakers may be in a position to travel to France as early as June – even though the Government’s phased exit from lockdown means people will be unable to travel far from their homes until the second half of July at the earliest.

One customer who has contacted The Irish Times says he was told that, unless they paid the balance in full, his family would lose a substantial deposit they had put on a sailing that they believe is extremely unlikely to go ahead because of the Covid-19 crisis. He says he was also told that, if the ferry crossing were eventually cancelled, he would then be given a credit note instead of a refund.

7 Suzi Quatro: ‘If he’d done that backstage he’d have been singing soprano for the rest of his life’

12 My Covid experience: ‘The mind starts to race. Oh God, why didn’t I do more with my life?’

16 One mask is good. Would two be better?

19 Covid-19: Passengers may be required to pay for stay in quarantine

23 Michelin stars 2021: The Irish restaurants in the running

25 Covid-19: How to look after yourself if you catch the virus

26 Traveller who tried to book hotel wedding awarded €15,000 for discrimination

27 Una Mullally: Government failing to lead us through pandemic

30 Talks resume between unions and officials over reopening special schools

32 Covid-19: About 1,500 fines issued for non-essential travel over past two weeks

34 Hang up! HSE warns public to be aware of Covid vaccine scam

35 Scottish Tories call for boycott of any independence referendum

38 10 things about Marlon Brando that might just surprise you . . . or will they?

39 The chickpea stew that broke the internet in the US is here. Give it a go