A walk for the weekend: Barley Lake, Glengarriff, Co Cork

With many options, and a bit of back-tracking, the Barley Lake walk is an adventure 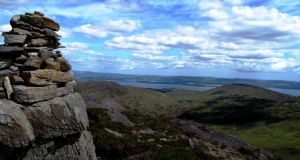 In the days when Glengarriff was one of the most popular destinations for an excursion from Cork, the high point of the expedition, both literally and figuratively, was a trip to Barley Lake which is 300m above sea level.

Even though we travelled up by car, we felt like real mountaineers as we surveyed the precipices surrounding it. I had long planned to return to explore them.

The circular route around the top of the cliffs looked inviting but on the far side I could see a deep cleft on the ridge and decided to go clockwise around to check if it was a surmountable obstacle before I committed myself to the circuit. In the event I got into a conversation with a Dutch hiker and then quite forgot my plan and headed in an anticlockwise direction on to typical Caha terrain with pods of whaleback rock outcrops interspersed with boggy hollows and small loughs. Navigation is a nightmare across this kind of terrain as you can’t keep to a straight line.

However, it was a gloriously clear day with a gentle northerly breeze wafting scattered tufts of fair-weather cumulus clouds southwards over Bantry Bay (pictured).

I decided to use the loughs as a guide to keep on course towards Ram’s Hill (533m). This plan soon went awry as, at one point when I stopped to get my bearings, I realised I had passed the first lake without seeing it. This wasn’t a bother as a cairn marking the start of the descent was in view whenever one crested one of the crags.

Rather than bag the summit of Ram’s Hill, which didn’t look worth the effort, I decided to meander among the lakes until I reached spot height 471m. It was a delightful amble as the healthy orange lichens which covered the rocks glowed in the lateral rays of the afternoon sun and were reflected on clear still waters.

On attaining the ridge I was mesmerised by the view into the head of the Coomerkane Valley where two vivid lakes lay nestling in a throne of emerald hues capped by a gleaming silver frieze of bare ribbed rock. The upper lake is called Lough Eekenohoolikeaghaun; make what you will of that tongue twister.

The last section of the ridge is narrow and rugged but if you drop down a few metres on the Barley Lake side a sheep track provides an easier passage. Then I came to the cleft which is probably a glacial melt-water channel. Not a nice feature to come across towards the end of a long trek but luckily I was able to backtrack 50m and walk down a grassy ramp on the Coomerkane side and back up into the fissure from where I was able to scramble back onto my route which led down to the lake and back up to the start.

So, many years after first falling in love with the lake, I had finally embraced it.