A Walk for the Weekend: A Suir-footed stroll in Co Tipperary 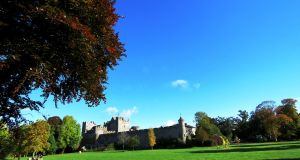 In the days before the M8 was constructed Cahir was one of the traffic blackspots on the road to Dublin. As you inched through the streets you did not have good thoughts about the place, and as a result it was not a location you would think of visiting for pleasure.

I had occasion to visit the town recently and, having a few spare hours, I discovered a most pleasant walk along the banks of the river Suir.

Cahir Castle towers over the car park. It is one of the largest castles in Ireland, and was built in 1142 by Conor O’Brien, Prince of Thomond.

It is open to the public and has a guided tour and audio-visual display, but it was a glorious day and I wanted to be outdoors like the bevy of swans who were sunning themselves on the rocky outcrop on which the castle is built.

The first part of the walk is a circuit of the tree-lined periphery of the Inch Field at the back of the castle which has such specimens as oak, birch, willow, white poplar and cherry laurel. The small back door atop a rocky ramp sparked my imagination, for while the front door would see the passage of those with legitimate business, the back door would be the entrance for spies, intriguers and persons in pursuit of les liaisons dangereuses.

When you leave the field turn right on to the riverside walk which runs for two kilometres down to the Swiss Cottage. Again the walk is lined with a wide variety of trees such as lime, holly, ash, cypress and sycamore. I was too early for the wild flowers but an information board at the start of the walk indicates a diverse flora in spring and summer. And all the while there is the gurgling of the Suir as it pulsates its way down to Waterford and the sea.

The walk terminates at the improbable Swiss Cottage. Built in 1810 by the Earl of Glengall, this cottage orné or ornamental cottage was designed by the famous Regency architect John Nash. There are a number of such edifices around the country but not with the same design, of course.

It is open from March 24th to the end of October.

Return by the same route to the car park and then go up the street to your right which leads into the large and elegant town square.

Keep left until you come to a restored warehouse and go left down a lane which brings you back on to a riverside walk above the town. It is worth going as far as the magnificent rail viaduct which is a box girder bridge with castellations at either end mirroring those of the castle.

On the way you will pass the rear of St Paul’s church which is separated from Erasmus Smith House by a ha-ha.

Head back towards the town where you will find a propitiously placed tea room overlooking the weir.

Is it a good idea to move in with my partner now, or am I mad?
2

Coronavirus: ‘you may have heard of a game called Plague Inc’
5

When a force of nature attacks, our only response must be kindness
6

Older people on isolation: ‘I have plenty of food but not much appetite’
7