Review: The big house on the shores of Lough Swilly is all about food provenance 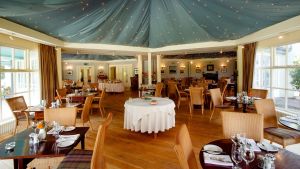 The Cook and Gardener

It felt like January when we arrived in Donegal and now, days later, it feels like June. The bitter wind has been replaced with a warm breeze carrying the sounds of rooks in the trees and waves on the beach. Donegal puts the great in great outdoors. Wild is the word of the moment. They use it here like “very”. So you can be wild busy or wild tired. Tonight we’re wild hungry.

The rooks and waves sounds greet you at the front of Rathmullan House, a hotel a short stroll outside the town of Rathmullan, on Lough Swilly. A morning dip will confirm those waves are wild cold. There are rope swings tied to the boughs of an old tree and a stone well brimming with sweet leaf-strewn water.

Alongside the house sits a beautiful walled garden. The oldest plants in it are some lichen-furred apple trees that look like they have produced many an apple tart over the decades. Mizuna leaves in the polytunnel have been picked and are waiting to be collected. Seedlings and young courgette plants wait to be planted. When this garden is in full summer swing there will be plenty of produce for the big house kitchen.

The restaurant here is called the Cook and Gardener. The old big-house model of food grown in the grounds and served at the table has been a pet project of the owner of Rathmullan House, gardener Esther Gustafsson tells me. One of Bob Wheeler’s favourite fruits to make jam is gooseberries. There is an abundance of gooseberry bushes here. Is there any way to pick them without getting pricked by their needle sharp spines I ask? No. You just get on with it.

The restaurant is set in a newer wing of the hotel with domed ceilings that have been tented in blue and dotted with fairy lights to replicate a night sky. There’s a more casual Tap Room on the other side of the hotel serving delicious wood-fired-oven pizza with a great selection of craft beers, including from Kinnegar, the local hero. You can sit outside under the stars if the weather truly warms up.

But tonight we’re on rattan chairs with tartan seat cushions. There are fresh garden flowers in glass vases on each table. In a more “tigered” hotel the restaurant would be trumpeting its food provenance but the Cook and Gardener is a place that gets on with the business of serving up the best of food from the area without the self-congratulation.

So there’s a bowl of Mulroy Bay mussels. They’re served in what’s described as a white wine veloute, which is almost entirely composed of thick frothy cream. There are shallots, lemon and parsley here, too, and the soupy broth is as gorgeous as the seafood. Donegal scallops have been fried and then had a shimmering broth of chilli chicken and turmeric poured over them to bring a savoury heat to their sweetness. Crispy Parma ham adds a salty crunch.

The main courses are as accomplished as the starters, in a quiet we’ve-always-done-it-like-this sort of way

The main courses are equally accomplished in a quiet “we’ve always done it like this” sort of way. I have crisp skinned brill fillets, small pieces of fish fried in butter and then placed like roofing over Pink Fir potatoes from Ballyholey with chard from the garden. There’s a lemon buttery finish on everything to bring it all together.

Liam’s rump of Slaney Valley lamb is served lusciously pink with some slices of creamy gratin potato, sunny yellow carrots and a wild garlic pesto that brings the woodland wilt and freshness of this ingredient to the table beautifully.

We eavesdrop on the next table to hear what “Bob’s special dessert” is, and it’s an apple crumble. Bob has hung up his apron as the full-time cook. Abdul Muhib Azad came from Bangladesh in 2010 as a trainee commis chef and worked his way up to head chef.

Having seen rhubarb in the garden earlier, could we have a rhubarb crumble instead? Some stewed rhubarb destined for breakfast is repurposed and without any fuss we get the pink sticky bowl with a light creme anglaise to make my day.

I’ve long lamented missed opportunities in hotel diningrooms, where they take a captive audience and feed them a cut and paste meal from a global menu of posh ingredients. Rathmullan doesn’t do that. It puts Donegal with all its beauty, wild and cultivated, on hot white plates and I can’t think of a better way to eat wild good food.

Dinner for two with two glasses of wine came to €93.50