A modest Dutch biker in the mould of Clancy 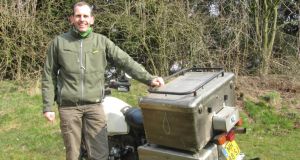 Johan Jansen is a gardener. He is 50 years of age and single.

Johan lives in Eindhoven in the southern part of the Netherlands, not too far from Belgium. Like the rest of the country, people in these parts mostly take great pride in their gardens. They like them simple but neat and tidy and they like blooms.

Johan works for himself. People have him in to tidy up, to trim and to cut back, to dig stuff out and plant new shrubs and flowers, and also to build things like patios, sometimes made of bricks in the Dutch style.

In his other life, Johan’s parallel life as it were, he is a biker. Not a hooligan, lunatic, hairy-crazy biker festooned with tattoos that you do not want your daughter to meet.

Johan is a quiet biker and his bike is close to ancient, not the bike of a speed maniac. It is a 1988 BMW R100 GS, essentially the forerunner of my, Geoff and Gary’s 1200cc BMW Adventures. Johan’s was the first of its kind in the Netherlands. His 1,000cc R100 has well over 200km on the clock (he’s on his third lap of the odometer) in part because he went on an extraordinary adventure in 1991.

He and two mates headed off from Eindhoven in the direction of Africa. For six months they travelled through Morocco, Algeria, Nigeria, Cameroon, the Congo, Zaire, Uganda and Kenya, although, as Johan puts it, about two months were spent waiting – for ferries to get across rivers or spare parts when things went wrong.

Before he left the Netherlands, Johan did some, what might be described as, coachwork on his bike. He made a set of aluminium panniers and another huge aluminium box that sat on top of them, straddling the saddle. They are held together by pop rivets.

The additions created a large amount of luggage space as well as a mounting plate for a spare tyre. The exhaust was also modified and rerouted and tucked up close to the saddle so that the boxes fitted snug onto the side of the bike.

Somewhere along the way on the southern side of the Sahara, the rear shock absorber and the hub on to which it was attached was holed and oil began to spew out. So Johan and his mates used their cooking stove to melt an aluminium tent peg and, with assistance from a sardine tin, patched it up.

The repair worked until Cameroon where, in jungle, it all went wallop again. But, with the help this time of some local people, the shock was welded properly back onto the hub.

“There was always a way to fix things [in Africa],” says Johan. “Here when a shock absorber is broken we throw it away but there, there is nothing and they have to be creative and so from nothing, you have something.”

Over 50 people helped Johan and his pals get going and they continued deeper into sub-Saharan Africa.

Near Brazzaville, it took them two weeks to find someone who would ferry them and their bikes across a river, and then they could only go eight to 10km a day along roads swimming in mud. In the city, they ran the gauntlet with lawless troops intrigued at white men queuing for bread.

Johan tells his tale of adventure with modesty but boyish enthusiasm and excitement as though it all happened yesterday. He’s got the right stuff. He’s a biker in the mould of Carl Clancy.