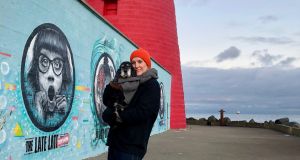 In the deep quiet of the April lockdown I sat with my dog on my knee on a bench outside the vet’s. She leaned against me looking into the distance, like she knew we were coming to a full stop. Her name was Minnie. She was a moocher, the smallest in the litter, hand-fed. “She’s afraid of dogs,” I’d tell other dog owners on walks. “Because she doesn’t think she is one.”

She was my stalker. I found her once curled up on my side of the bed, nesting in my T-shirt, which she had scrabbled out from under the pillow. When my attachment-parented children had outgrown the need to be beside me while I peed, she carried on the tradition, pushing open the door, to gaze at me with chocolate brown eyes. As they needed me less, she needed me more.

At my desk, if the words didn’t come and even when they did, it helped to kneel down and bury my nose in her biscuity, soft fur. She was a jigsaw piece; her small head fitted perfectly in the palm of my hand. Her ears grew heavy with fur between haircuts, tightly whorled like astrakhan. We’d hold them in bunches against her head for Princess Leia effect. Help me, Obi Wan, you’re my only hope. When she thought we had left her alone she would sit on the couch and keen, a mournful mountaintop wolf in the body of a drama queen cocker spaniel.

She was a dote and a demon. She once took a shit in the middle of my parents’ table in spectacular protest at being left. She hated being left. They forgave her. Or they said they did.

In January there wasn’t much time. Her back legs had stopped working. A steroid injection bought a few weeks. Knowing the moment is coming doesn’t make it any easier when it rushes towards you. Our world had contracted and for her last weeks she was never alone. Another woman waited on a bench across the way saying goofy things to her horribly healthy dog and I hated them both.

When the vet emptied the second syringe into the bare patch of black skin where they shaved her leg, I told her she was “the best girl”. The walk out the door was wretched, carrying the empty collar and a limp lead, not to have her ahead of me straining to be out in the air and away.

As spring rolled into summer the man who was fond of but didn’t love dogs prowled the rescue websites. Canines and cottages. Everyone wanted one. I worried the next arrival would forever be The One that Is Not Minnie. But we were dog-ravenous. If Cujo had come slavering up to us on that visit to the ISPCA headquarters in deepest Longford, we probably would have taken him.

But her name is Seoda. It’s the Irish for jewels, or “dog who sheds her own body weight in hair daily”. She looks at us with enigmatic amber eyes as if trying to figure out why we seem to need her so much. She lights up when someone walks into the room. That someone is not me. It’s the man from Longford, an ongoing joke about the bond between midland strays. I’m the needy one now. But she’s making winter feel easier as we whisper endearments into her black fur, which is growing glossier by the day. Just a few nights ago, when it all got too busy, she came to sit by me as I wrote. I lifted down Minnie’s rug. She’s on it now. I can hear her breathe. She’s a bigger dog but she curls up small, a different jigsaw piece. And we’ve fallen back into shape around her.