Tanya Sweeney: I've developed a lust for small pleasures. And it's wonderful

If I try hard enough, I can feel, smell and hear my happy place: a live music gig 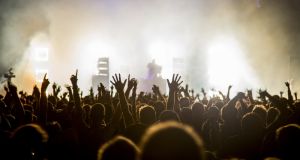 At their best, music gigs can make me shiver with happiness. Photograph: Getty

I had to have a word with myself, the way self-help gurus suggest you do. Every day was becoming a revolving door of worry, anxiety, stress and what-the-hell-is-this-actually-the-end-of-civilisation.

This article is part of a series focusing on hope, courage and resilience in the time of Covid-19

Not only is this line of thinking exhausting; it’s bloody boring. So now, I’m spending more time developing a lust for the small pleasures. Having a shower before getting into bed. Clean sheets. Naps. Baths on a weekday morning. New socks. A full fridge. Tea made just right, handed to you by someone else. The crack of the spine on a new book. Popping bubble wrap. Warm clothes straight from the radiator. Cultivating a new appreciation for them all is a surprisingly effective – not to mention cheap – way to lift the spirits.

Have you ever arrived at a moment after looking forward to it for so long? Truly, there’s nothing better

Here’s a sentence I never thought I’d be writing: my mind is one of my favourite places to be right now. I might, corporeally, be shivering on a park bench in Dublin with a takeaway coffee, but my mind is looking forward and letting my brain take me to lovelier places and happier times. And once you put your mind to it, you’ll realise that if there is plenty to miss right now, that means there is plenty to look forward to. Have you ever arrived at a moment after looking forward to it for so long? Truly, there’s nothing better. It’s the simplest pleasure there is.

If I try hard enough, I can feel, smell and hear my happy place, which is at a live music gig. Do you ever have that moment where you feel truly on the grid, where life is just perfect and you could live within its warmth forever? Most of mine have happened in front of noisy, sweaty, guitar-wielding men and women, with the volume at ear-shattering levels.

I was lucky in that my very first music gig, which was Radiohead in the now-defunct Temple Bar watering hole the Rock Garden back in 1993, was feted by even more seasoned gig-goers as something of a legendary experience. I had been in detention (on account of some skirmish or another in biology) only hours previously, and while I was troublesome at 16, I was also shy.

Watching this band stand on a stage – the bravery! – and perform in front of us felt like some kind of miracle. I floated outside, yelled something about having had a two-hour orgasm in the gobby, ebullient way that only a teenager can, and passed out on the cobblestones, next to the car where my dad was waiting patiently to pick my friends and me up. Even in the moment, I knew I had accessed a whole new plane of pleasure.

At their best, music gigs can make me shiver with happiness. There’s the anticipation, for a start: from the second you buy your ticket and pencil it into the diary. You arrive at the venue and you’re immediately with your tribe: friends, regular faces you see at all the other gigs, people who you know probably had the same reaction to hearing this particular artist’s music that you did. You’re all standing shoulder to shoulder; the warmth of bodies making you aware of the cold drink in your hand, sweating condensation. There’s something so fundamentally human and life-affirming about it.

There’s the moment when the house lights go down and a small quake of anticipation fills the room. And then, there are those few seconds of silence before you hear the first note. And then, they play a song – maybe one that you listened to in private, held your breath so you could hear it more fully, connected with it, and let it transport you – and it’s loud, so loud that the song you love feels like an embrace. And you know that others in the room feel exactly the same way, having their private love affair with this song, their emotions, out in the open for all to share. We are locked in a sonic embrace.

It’s glorious. Sometimes I can’t believe this can be even bought with money.

Everyone – the performers, the crew, the audience – is going to be delirious with gladness to be back in the darkness, beneath the loudness, singing along with pure abandon

Because I’m getting older and grouchier, gigs became something of a mild annoyance more recently. There was always someone taller in the way, or someone bitching loudly about a girl at work nearby, or someone taking dozens of selfies with an iPad, or someone who would ignore what was happening on stage, until the band got to the one song that they knew from heavy rotation on the radio, and they would sing along like a bag of cats being hammered. Now, I can’t wait to be among every last one of them.

When I think of the next gig I will be at, I have no idea how it might look or feel, and what modifications the live experience will undergo in the Covid era. What I do know is that everyone – the performers, the crew, the audience – is going to be delirious with gladness to be back in the darkness, beneath the loudness, singing along with pure abandon, like a bag of cats being hammered. Just thinking about it, and how richly sweet this will be, gladdens me no end.