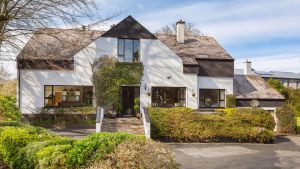 The Duolingo app that was optimistically downloaded in the first days of lockdown – when all that “spare” time stretching ahead seemed the perfect opportunity to finally learn a bit of Italian – remains unopened. Like so many of those good-intentioned projects it got lost in the permanent mood of distraction – so the name of the house now for sale, Sotto Il Monte, had to be translated and the vendor – who grew up and still lives there explained all.

Her parents bought the detached property on Ballycorus Road in Kilternan in 1963 when they had three children; she arrived later. This is a rural road where the houses have names, not numbers, and they renamed the two-storey detached house Sotto Il Monte – under the mountain – as a nod to the father’s Italian heritage; his grandfather had moved to Ireland from Italy many decades before.

Later, in 1990 when the daughter got married, she and her new husband moved into Sotto Il Monte, living upstairs while her mother, then widowed, remained downstairs.

While the house was never divided officially, they shared the front door and there were no internal divisions created, but a kitchen was installed upstairs for the young couple so everyone could have their own privacy. Things changed again when they had a baby and the pragmatic new grandmother suggested a swap – that she move upstairs to the smaller quarters , giving the young couple and their baby more space downstairs.

There was never a need to extend the 279sq m (3,000 sq ft) house, but 11 years ago the couple did some renovations, updating the kitchen and opening up the downstairs living area to provide what the owner describes as “a greater flow to the space”.

Now the ground-floor level features three bedrooms, a large drawingroom, two bathrooms, a bright spacious livingroom and an open-plan kitchen/dining area, with French windows leading out to the south-westerly side garden.

Upstairs there is a living/diningroom with a kitchen installed in a corner, a bathroom, and a further bedroom with large walk-in wardrobe.

It’s most likely that whoever buys this house will, as part of a larger renovation – not least to improve the D1 Ber – take out the upstairs kitchen, make the upstairs livingroom into a grand main bedroom and return the two-storey property to something closer to its original layout.

The house sits on 1.2 acres and unsurprisingly, given its location at the foot of the Dublin mountains, includes three stables that were home in the 1970s and 1980s to the children’s ponies. Now in poor condition and long used for storage, they could be renovated if new owners have horsey interests.

There is a tree-lined driveway up to the house, and the owner says the large garden, which is filled with mature shrubs and trees, is fairly low maintenance, with the lawn and flowerbeds the only features needing regular attention.

The house is within a stroll of one of Dublin’s loveliest walks, through the Coillte-managed forest to the viewing rock at Carrickgollogan hill – with spectacular views over south Dublin and north Wicklow – and to the wonderful tower at the 19th-century Ballycorus lead mines. Up here Ballycorus feels like the countryside, a rural slice of south Dublin although it’s only a short spin into town. The best of both worlds.