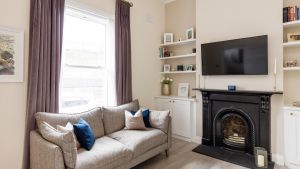 Old photographs of 24 St Anne’s Road in Drumcondra – which are still online – tell a different story of the house that has just come to the market on Thursday.

It was purchased in 2018 for €442,500, according to the property price register; the new exterior picture is a good indication of its significant refurbishment.

Pointing the front facade was “a huge job as we wanted to restore its original character”, according to current owners Trevor Daly and Katie Hughes, who both work in advertising. It involved a total rebuild of the interior wall “as the previous owners had plastered over the exterior brick, and it needed to be reinforced”, according to Daly.

The entire house has been rewired and replumbed with a new boiler, flooring, insulation and windows by Icon in Carlow.

“Paul Miskella of Icon did an amazing job. He created new sash windows from the originals. We initially thought it would be beyond our budget but they came in on time and within our price range.”

When it was for sale in 2018, the 80sq m (861sq ft) property was listed as having three bedrooms, as the original livingroom inside the front door was used as a third. Daly and Hughes turned this back to its original function, but it could easily work as a third bedroom if needed.

A new bespoke kitchen was installed and features a beech countertop that creates a natural divide in the open-plan area with a livingroom. This space is warmed by a stove – neatly tucked into the old hearth – and an old Victorian open fireplace provides additional warmth in the front livingroom.

We would really love to stay in the area, but there is nothing really for sale here at the moment

The bath was removed from the old bathroom, and is now replaced by a huge wet room-type shower for minimal maintenance. The two bedrooms; a double and a good-sized single, have been totally refurbished like the rest of the house.

The property also benefits from a small courtyard off the livingroom to the rear of the house.

Daly and Hughes have placed their home on the market, as they have their eye on a larger home in the south inner city. “We would really love to stay in the area, as the train station is a minute’s walk, and there are parks all around us, but there is nothing really for sale here at the moment.”

Their home, in turnkey condition, is on the market through Sherry FitzGerald seeking €495,000.