Shopping reopens on Henry Street. ‘Masks? What’s the point in wearing them?’

After three months at home, people are keen to get out. But safety rules could make life tricky 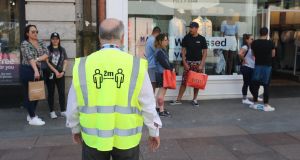 Mick McLoughlin, a busker, is belting out The Rare Ould Times on Henry Street in Dublin on Monday morning, as many shops in the city finally begin to reopen their doors. These are not the familiar rare old times, however. These are weird new times for retailers and shoppers alike. Barriers stand stacked at every junction, to be swiftly pulled into place to control crowds and shut off streets if necessary. Bands of gardaí patrol the streets, politely instructing people in queues to socially distance from each other. “No browsing” reads a sign outside Holland & Barrett.

The man in the wheelchair at the top of the queue for Smyths, the toy store on Jervis Street, is after Paw Patrol toys for his two youngest grandchildren. “It’s the first time I’ve been let out in three months,” Mick Ellis says. “My son has me locked up for three months.” The queue is short and brisk-moving.

Next door, at the Basecamp outdoor store, James Lucas, a floor manager, is wearing a face shield, as are all his colleagues. Along with tents, sleeping bags and other camping gear, Basecamp sells jackets, fleeces and a big range of hiking boots. So what is its trying-on policy?

“Customers cannot try on clothes. They have to take them home. If they don’t fit they have to bring them back, and then we will keep them off the floor for three days,” he explains.

Customers can try on hiking boots – a high-ticket item – in store, but if they don’t then buy them, the boots, again, will have to be taken off the floor for three days.

While I’m in the shop, David Nagy is hunting for a pair of size-46 hiking boots. He is already lacing up pair number three. I move on before he decides whether to purchase or not, but even if he does buy one pair, the other two styles in his size are going to be out of circulation until Thursday.

If all customers try on several pairs of boots before finding the right fit, it will quickly run down the pairs Basecamp has for sale. And if similar things happen in other shops, too, it’s going to be very challenging for all of them to provide a full range of sizes and styles each day.

“It’s still nice to get a shopping bag,” explains Leslie O’Brien, who is queuing with his young son, Tom, outside JD Sports. This shop has by far the longest queue on Henry Street before doors open, at 10.30am, although every footwear shop here has queues, including Office and Skechers.

O’Brien and his son want to buy runners. “And maybe a tracksuit. You have to try on the runners, really,” O’Brien says. He didn’t want to buy runners online, and they were both mad keen for an outing. “This is the first time in three months Tom’s been out of the estate,” his father says.

Farther down the queue, Sharon and Glenda Harper, who are mother and daughter, are also waiting to buy runners. “And bargains. Whatever bargain they have,” Glenda says. It’s Sharon’s first time outside her house in three months. “From the house to the back garden, from the back garden to the house. That’s as far as I went for three months. You might as well be in Mountjoy,” she says. “I was going off my head.”

By noon the street has a definite buzz, but it’s still nothing like a usual shopping day. The Moore Street stalls are empty. Arnotts is still closed. Zara is closed. Around the corner, Eason is closed. Penneys is also still closed, although crowds are expected for that reopening, later in the week – a reopening that the patrolling guard on a bicycle I speak to expects will provide significant social-distancing challenges, because of the anticipated numbers and their younger age profile.

In a whole morning I see fewer than 10 shoppers wearing face coverings. “Masks?” Leslie O’Brien says when I ask if he has considered wearing one. “Sure, we don’t know if they work or not, so what’s the point of wearing them? Isn’t washing your hands the only thing that works?”