‘Things may be easing but the fear persists’

There may be hope but, for someone with COPD, the fear won’t go away easily 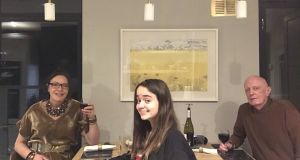 Paddy with his wife, Connie, and daughter Charlotte.

“Over the last few months, fear has exerted a kind of gravity pulling us down, but now we find there is hope lifting us up again.”

The words of Taoiseach Leo Varadkar as he announced an easing of our Covid-19 lockdown.

There may well be hope. But, unfortunately, the fear won’t go away easily.

Perhaps the most frightening part of this whole dreadful pandemic is how quickly we got used to change, how careful we all became in an instant, and how easily we accepted restrictions.

Things may be easing but the fear persists.

Maybe it’s just me. I’m one of the vulnerable having, as I do, stage four COPD (chronic obstructive pulmonary disease).

In case you’re wondering, there is no stage five.

The majority of people in the country began to endure lockdown on March 12th. But it began for me on October 11th when I came home from hospital after two weeks as an inpatient having contracted yet another lung infection – my 18th.

My regime – it wasn’t called self-isolation back then – became a great deal more severe when Covid-19 arrived.

I am certainly not alone in living a restricted life. There are an estimated 110,000 people in Ireland with some level of COPD. And they all have to avoid risks.

It’s more than six months since I’ve been in a shop or a pub or a restaurant – with the one exception of a risky meal out on New Year’s Eve, ruined by the burglar alarm going off in our home, triggered by the dog we forgot to put into its cage, and cutting short our one and only family night out since October!

It’s more than six months since I’ve been at a live music event or been in the company of more than one or two people.

Indeed, even appointments with the cardiologist, orthopaedic surgeon, ophthalmologist, gastroenterologist, otolaryngologist and dietitian have been postponed. (There is no such thing as a hypochondriast due to the fact that my hypochondria is incurable!)

When it was allowed, I went with my family for a stroll in Stephen’s Green, oxygen machine slung over my shoulder. After such a long time restricted to short walks near my home, it was a joy, especially when I spotted a moorhen nesting in the pond.

I also did a 5km charity walk. Of course I didn’t do it all in one go. But as it was organised by my old school, Blackrock College, in aid of cystic fibrosis, a charity close to my family because my wife’s nephew died with CF, I managed to cover the 5km in three separate walks in one day.

Then, just a few days ago I met some friends I hadn’t seen for half a year.

It was a special birthday for one of them and so a handful of us met, two metres apart, in an open area. It was a chance to offer our best wishes in person to a gentleman who just joined the over-70s. No handshakes, no slaps on the back, no hugs. Just Happy birthday sung badly. And we had a family outing to a drive-in showing of four Father Ted episodes at Leopardstown racecourse last week.

So what do you do when you’re locked up for months on end?

In my case, I read non-stop, mostly about music.

Hunter Davies’s excellent memoir A Life in the Day about the ’60s, Bring It On Home, Mark Blake’s book about legendary Led Zeppelin manager Peter Grant, and Craig Brown’s wonderful book about the Beatles, One Two Three Four.

I’m lucky that Hanna’s in Rathmines offered a click-and-collect service and though its doors are open again I won’t chance it yet.

Tensions? Yes, of course there are. I’m a worrier. And worriers irritate non-worriers

I watch television but it really is difficult to find something worth watching. Normal People was fine. But I never enjoy anything that’s hyped; it’s an in-built resistance.

I live with my wife, Connie, my 14-year-old daughter Charlotte and our noisy dog, Penny.

Tensions? Yes, of course there are. I’m a worrier. And worriers irritate non-worriers.

But we get over them though, sometimes, it’s hard to convince our daughter to detach herself from her screen.

With a wife who could out-garden Monty Don or Diarmuid Gavin, I have, at least, a pleasant place to sit and read or sip the occasional glass of wine even if it’s not actually recommended as part of my treatment. The garden has become my oasis.

What the rest of the summer holds, I don’t know.

Flying is not recommended for me so we may go to one of our favourite spots at home – there are many to choose from.

But what can we do when we get there? What does a 14-year-old do without her friends?

In the past, we’ve brought one of Charlotte’s friends with us. But imagine coming home and finding that friend had contracted Covid-19? Guilt and blame would smother us.

It won’t go away.