‘Worst job I ever had? I was drafted in to pack socks’ 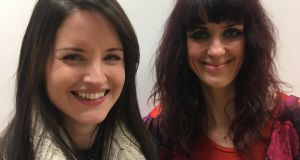 Do you know why you are named what you are?

Angela: Mine’s a little embarrassing – for my parents, not for me. My mum’s story is that they had no idea what they were going to call me and people were asking ‘What’s the baby’s name?’ There was an envelope in the bedside locker from the last person who stayed there, and the name on the envelope was Angela. That’ll do! My dad says it’s because he’s a huge Rolling Stones fan and he loves the song Angie, but I think he made that up later.

Melanie: My parents nearly called me Melissa. My name means “honey” and “the dark one”. I’m definitely a bit of both. I have a lot of dark and a lot of light.

If you could exist during any historical period, which one would you choose?

Angela: As a historian people might expect me to say Enlightenment-era Paris, hanging out with all the big philosophers, but actually I would love to have been at Woodstock, and on the scene in San Francisco when Janis Joplin was wailing in dive bars.

Melanie: I’d go back to ancient Egypt. I remember getting lost in the Egyptian section in the Louvre in Paris – delighted!

What do you wish you studied in school?

Melanie: Me too. I actually went on to start a degree in philosophy and mathematics in Trinity. We should definitely be teaching it in secondary schools.

Angela: I think so. I think we should be teaching it from a really early age; how to argue, how to engage with others’ ideas in a respectful way, how to unpick something, how to think critically. It’s a great basis for anything.

Angela: I lost somebody very important to me back in June. That was the last time I had a really big cry. It took me a month to cry for her, probably because I was relieved her suffering was over.

Melanie: I cried after the Safe Ireland Summit. I was blown away by the sheer resilience of humanity and our ability to overcome the most extraordinary trauma, in particular the Holocaust survivors Riane Eisler and Edith Eger. It was so humbling.

Melanie: Kenya. I spent six weeks in the Great Rift Valley. It was an extraordinary experience. Waking up and following lion prints to the office in the morning, dodging black mambas. I never felt so alive.

Angela: Mine is Cuba, probably Havana; the colour, the liveliness, the music. The other thing I loved, as a historian, is they have official city historians in the cities.

Melanie: I had a particular denim jacket that I loved. It hardly fitted me. As my granny would say, my kidneys were probably showing and I was going to get a chill.

Angela: I used to always shop in charity shops. I used to only wear 1960s and 1970s clothes. I had a pair of fire-engine-red velvet flares, high-waisted. I used to wear them on special occasions. I still have them.

What is your favourite street?

Melanie: I love Dawson Street. As a child, when there were rainy days we’d go into the city and go into Hodges Figgis and get books. 37 is now one of my favourite haunts. I love it in there.

Is there any book you keep returning to?

Melanie: I love The Alchemist.

Angela: I love short stories. Tim Winton, the Australian writer, has a lovely collection called The Turning. It’s set in grim coastal towns in western Australia, former fishing towns where the whaling stations were closed down. He writes about it in such a raw, unflinching way. I adore his characters.

What is the worst job that you’ve had?

Angela: When I was in fourth year in school, we had to take it in turns – unpaid – to man the student canteen. It was disgusting. They only served chips and chicken nuggets and “pink sauce”. People would take tablespoons of it, slapping it on to the plates. We had to wash up after and there would always be plates glued together by the sauce, and you’d have to clean them in gross, grey water. You couldn’t get the smell off your hands.

Melanie: My parents had a sock factory growing up. I was drafted in to pack socks.

Melanie: From my mum, her resilience and tenacity for life.

Angela: I got contrariness and a love of books.

Melanie Lynch is the founder of Herstory. Dr Angela Byrne is a historian and the curator of Blazing a Trail: Lives and Legacies of Irish Diaspora Women at Epic: The Irish Emigration Museum, a free exhibition running at the CHQ Building in Dublin until November 25th