Will the day ever come when we stop obsessing about women’s bodies? 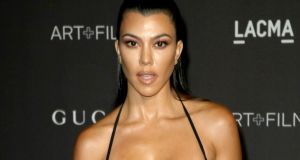 If you’re anything like Kourtney Kardashian, you’ll have woken up this morning and declared, “what the world needs now is more advice on vaginal steaming, STAT.”

Well, fret not. Kourtney (Kourt to her readers) felt there was something “missing in the healthy lifestyle space”. And so she has launched a blog, Poosh, to address the gap in a market apparently not entirely saturated with the wisdom of Gwyneth Paltrow, Rosie Huntington-Whiteley, Chrissy Teigen, Tori Spelling, Zooey Deschanel, and the countless other bored celebrities peddling “achievable” lifestyles to the young and impressionable.

The first thing you need to know about Poosh is that it is in no way inspired by Gwyneth Paltrow’s blog, Goop. Okay, sure, they both have the double ‘o’ thing going on, throw around verbs like “masking” (the art of wearing a sleep mask, do keep up), manage to imply they invented avocados and mindfulness, and flog €1,390 wastepaper bins. But honestly, that’s it.

Kourtney’s blog – again, in no way like Gwyneth’s – has sections on wellness, beauty, insights into her own lifestyle, and handy recipes for homemade playdough made from blended organic cabbage and beetroot. It also – and this is where it parts ways with Goop – has lots of images of Kourtney’s naked bum. There’s Kourtney’s bum on the side of a bath. Oh look, there it is on a barstool in Mexico. And there’s her bum again, soaking up some rays, as she lies face down on a sun lounger, casually eating salad.

I’ll be honest: I wasn’t there for the beetroot playdough, or even for the opportunity to become more intimate with the contours of Kourt’s bum than I am with my own child’s face.

What caught my eye was an article entitled How to Look Good Naked. “In a world of mirror selfies, bikini shots, and filters, the pressures to look a certain Instagramable way are real,” Kourt writes in a sentence that makes only fractionally more sense today than it might have a decade ago. Getting naked in that “certain Instagrammable way” has more to do with what you put on than what you take off. And what you put on should include €118 exfoliator, €245 body cream, €21 lip scrub, €99 anti-ageing cream and a face scrub made from crushed cabernet. It also involves water out of €47.24 Villeroy & Bosch tumblers. After that, it’s all about the lighting.

“Great lighting can do wonders for masking cellulite (yes, we all have it),” she advises. “Takeaway: candles are key.” I don’t want to sound like the kind of loser who only has 35 Instagram followers, but I’m concerned about the health and safety implications of lighting candles after lathering yourself in coconut oil, and downing the three bottles of Veuve Clicquot featured in the accompanying photo. But that may be why I have only 35 Instagram followers.

“You have to always pretend that there’s a string holding the crown of your head up,” she adds. Yes, even while doing whatever it is you intend to do naked after three bottles of champagne. To complete the effect, she suggests investing in an €18.89 long-handled bottle brush. It’s not clear what exactly you’re supposed to do with this, and perhaps it’s best not to ask.

The takeaway from all of this isn’t actually about candles, or even the kind of things a naked Kardashian might do with a bottle brush.

Poosh is the latest and crassest attempt to cash in on the increasingly lucrative insecurity industry. It’s yet another example of the burgeoning market in reminding women of all the ways their natural selves fall short. Your naked body in its unadorned state is, this industry chides us constantly, too gruesome for display under actual lights; too disturbing to be unveiled without the advance administration of truckloads of cosmetics, and quite a lot of surgery. The wider Kardashian family are not just the chief proponents of this reductive, misogynist messaging; they’re among its biggest beneficiaries. While Kourtney was flogging €118 exfoliators on Poosh, her sister Khloe was hawking diet shakes over on Instagram.

There is a backlash underway against all of this. Women like the actor, presenter and activist Jameela Jamil have been tackling the Kardashians and promoting body positivity, fighting fat shaming, and “bravely” showing off their boob stretch marks. I’ve nothing against Jamil. In fact, I applaud her.

But I also really look forward to the day when we can stop obsessing about women’s bodies altogether. I want my daughters to grow up in a world where being “brave” means standing up against injustice, tackling inequality or agitating for climate change – not leaving the lights on when you get naked.

On her Instagram, Jamil says,“As a woman, being proud of yourself and believing you are *enough* as you are, is an act of social and political resistance.” Is this where we’ve arrived at – a place where simply not hating yourself is an act of resistance? If that’s true, it’s almost as depressing as Kourt and her horror of cellulite.