Conor McGregor is everything we teach our sons not to be 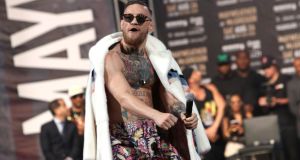 What will Conor McGregor’s son think of his father when he looks this vile spectacle up on YouTube in a few years’ time? Photograph: Mike Lawrie/Getty Images

Back in 2010 there was a mini-controversy when Green Party TD Paul Gogarty brought his 18-month-old daughter Daisy to a press conference. There she was, sitting up on her Daddy’s knee, in front of the assembled press and beside other Greens, because Paul had no childminder and Daisy had nowhere else to go.

She must have been bored to tears, God love her, as she was treated to Green Party leader John Gormley calling for a general election. Joe Duffy’s Liveline went into meltdown, with the usual rant-fest about how firemen and guards and the like were not able to bring their kids to work. Yada, yada, yada.

Talk about a storm in a teacup and meanwhile over in the corner, someone’s pouring all our hard earned tax-euros into a Brussels bank account. Priorities, people, priorities.

Anyway, fast-forward seven years and another well-known Irishman is bringing his child to the office. This time it’s Dublin MMA fighter turned boxer Conor McGregor. He was pictured recently holding his new baby son Conor Jack up in the air on an airport runway in Las Vegas (as you do) where he is soon to fight Floyd Mayweather in a hotly anticipated boxing match. When he “introduced” little Conor Jack to the world, McGregor was in the middle of series of events to promote the bout.

In case you missed them, below is a sample of what McGregor had to say at some of these so- called “press conferences” in LA, Toronto, New York and London. I put that in inverted commas around “press conferences” because they are merely televised spectacles where McGregor and Mayweather trade insults, pretend to hate each other, detail how weak the other is and what violence they are going to inflict. It’s really just for the television cameras to drum up as much viewership and hype ahead of the fight.

Here’s a flavour of what Dubliner said to his opponent and to thousands at the event:

On the count of three I want everyone in this arena to scream at the top of your lungs, ‘F**k the Mayweathers!’ One, two, three!

No, no, no, no, no. We can do better than that. When I count to three, I want this entire arena to scream, ‘F**k the Mayweathers!’

At yet another of the press conference, McGregor urged Mayweather to “dance for me, boy” in comments that were immediately pointed out as racist. In response, McGregor claimed he was “half black from the bellybutton down” before gyrating his hips and adding: “And just to show that that’s squashed here’s a present for my beautiful, black, female fans”.

Would you let your kids anywhere near this? What will Conor Jack think of his father when he looks this vile spectacle up on YouTube in a few years’ time? Will he think it was just a bit of craic? Part of the theatre, the entertainment, the fun and the pageantry? Will McGregor explain that it’s acceptable to call another man (or woman) a b***h or to make suggestive remarks to women about the size of your penis? Or is it just a case of the end (many millions of euros) justifying the means?

And where is the outrage on the Joe Duffy show, or anywhere else in Irish society?

McGregor on stage may be very different to the quirky boy-done-good Dubliner who looks after his family, but his public sees only one face of the monster, the face that gives voice to racist and misogynistic ideas, a grotesque cartoonish monster that sends a clear message to millions of young men and women that thuggish, coarse, aggressive, misogynistic and vulgar behaviour is acceptable.

And it seems even worse on Irish ears to hear McGregor, a son of Ireland, speak such awful, base vulgarity in his brilliant Dublin city accent and to think there’s a young lad out there tonight that thinks it’s okay to call someone a b***h or a p***k and the only thing that will happen is the crowd will cheer louder, and the bank account will grow bigger.