New to the Parish: Mai El-Mahdy arrived from Egypt in 2012 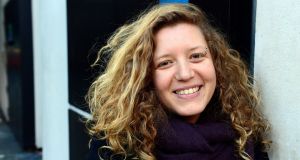 Mai El-Mahdy: “I want to be part of what’s happening here politically, I want to vote in the repeal referendum next year.” Photograph: Cyril Byrne

When Mai El-Mahdy started seeing posts on social media about the revolution spreading across the Middle East she struggled to believe the protest movement would reach Egypt. The movement, which later became known as the Arab Spring, was already gaining ground in Tunisia but El-Mahdy doubted whether people in her own country would have the courage to take to the streets.

El-Mahdy’s family home lies just a few blocks from Tahrir Square, the central plaza in Cairo which became the focal point of the Egyptian protests which broke out in late January 2011 and lasted for 18 days until the country’s president Hosni Mubarak was ousted from power.

“Those 18 days changed my whole life. My mum and I were at home when the demonstrations started and we could see the clashes. People began hiding from the Egyptian authorities so we decided to help them. Protestors were collapsing and fainting from the tear gas so we made a small hospital in our house. The internet and mobile phones had been cut off so we let people call their parents. It was a very emotional time, we realised something big was definitely happening,” she says.

“During those 18 days everything was different. We created a country within a country in Tahrir Square. There was no sexual harassment, no sectarianism, no racism. For a moment it felt like we the people were more powerful than anything else. It was the only time we actually felt like we belonged in our country.”

While the protestors held a united front during the 18 days of demonstrations, the movement began to fracture after Mubarak fell from power.

“We all started going in different directions and couldn’t agree on anything. Some wanted to focus on women’s rights, others thought we should look at LGBT rights. I don’t blame anyone for that. I blame the counter-revolution, the military that killed people.”

El-Mahdy was working as a PR and marketing manager with Hilton Hotels when the Egyptian revolution broke out. After studying Chinese, English and Arabic at university, and having spent some time studying and working in China, she had hoped to find work using her language skills. However, the only jobs available were as a translator or tour guide. After the 2011 demonstrations, El-Mahdy decided it was time for a change and moved to London to take a course in marketing. While there, a friend suggested she apply for a job at Facebook in Dublin.

I had a nervous breakdown, it felt like all the money in the world couldn’t help these people.

“Back then I used to think of Facebook as the place where the revolution had started, we all felt very emotionally connected to it. But when I got the job I actually felt sad because I didn’t want to leave Egypt. I wanted to be there for the political change. But I believed I could also change things from working inside Facebook; that I could influence more by being inside.”

El-Mahdy arrived in Dublin in January 2012. She felt very lonely during her initial weeks in the city but began to settle once she made friends among the international community at Facebook. “I remember in my first week in Ireland I was walking up Grafton Street and I saw a demonstration for Palestine and thought ‘okay, this is where I should be’. I felt the people here were very political and I liked this.”

El-Mahdy’s plan had been to stay in Ireland for one year and then return to Egypt. However, helping protest groups from inside Facebook was more complicated than she had envisioned. “After 5½ years I realised that I would never change anything sitting behind a screen and a desk. If I really wanted change I needed to be outside. After five years at Facebook they give you a month called ‘recharge’ and you try something totally different for a few weeks. I was very interested in what was happening with the refugee crisis so I decided to volunteer in Greece. ”

El-Mahdy spent more than a month working as a translator in a hospital outside Athens in the summer of 2017. She became very close with some of the Syrian families living in the Ritsona refugee camp but felt increasingly helpless in the face of such adversity.

“I had a nervous breakdown, it felt like all the money in the world couldn’t help these people.” A Syrian friend in the camp comforted El-Mahdy while reminding her of the importance of staying strong for the people around her. “She said ‘This is our life now, you need to be strong so that we can be strong and continue living’. I didn’t cry after that day. When I got back to Dublin I couldn’t work, I couldn’t eat, I felt so sad that I’d left all those families behind. I had the privilege of being able to leave.”

El-Mahdy decided to leave her job in Facebook and began volunteering with refugees in Mosney and Ballaghaderreen. In the autumn she found work as the project coordinator of a media training programme for young refugees and in December she became an Irish citizen.

She felt overjoyed to have an Irish passport which would finally allow her to move around without having to deal with the visa restrictions and immigration costs faced by Egyptian travellers. However, she felt conflicted by the power of this small document which suddenly made her more “acceptable” in the eyes of European immigration officials.

The day after her citizenship ceremony El-Mahdy posted the following words on her Facebook page: “I haven’t changed one bit. I still carry the same ideas and principles I’ve developed over the years. But starting today, I can move. I am no longer subject to some authorities’ decision on whether or not I’m allowed to cross the border. Can’t help but wonder what was wrong with me before today? What’s wrong with the billions of people around the world who are trapped within their borders?

“I’m looking forward to the day when this piece of paper means absolutely nothing. The day when we are all free to roam anywhere and everywhere – no questions asked, no identity required. Just us humans.”

She hopes to spend more time volunteering in Lebanon and Greece in 2018 but says Ireland will remain her base. “I want to be part of what’s happening here politically, I want to vote in the repeal referendum next year. But I still do feel lonely sometimes. At the same time I feel lonely when I go back to Egypt. I’m stuck between Ireland and Egypt now. It’s not completely home here but it’s not completely home there either.”