Who in politics and entertainment do Irish people admire the most? 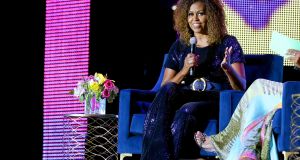 Lawyer, writer, and former first lady of the US, Michelle Obama.

Irish people admire Michelle Obama and David Attenborough the most, according to a new poll.

The former first lady of the US, who took 12.17 per cent of the vote, was followed by Irish Olympic boxer Katie Taylor (10 per cent of the vote) and cervical cancer activist Vicky Phelan (8.72 per cent) in the category of most-admired woman in Ireland. Former president of Ireland Mary Robinson was fourth (6.73 per cent), and talk-show host Oprah Winfrey fifth (6.45 per cent).

More than 42,000 people in 41 countries were surveyed by international data company Yougov, including Ireland, and results were also tallied for an overall international list.

Gates topped the international poll as the world’s most-admired man, a place he has held every year in which Yougov has conducted the survey. The top five of the men’s list remains unchanged since last year, with Barack Obama in second place, Jackie Chan in third, Chinese president Xi Jinping in fourth, and Chinese businessman Jack Ma in fifth. Gates was sixth in the Irish poll, but Chan was 11th, Xi was 21st and Ma 22nd.

Twelve of the 20 most-popular women in the international list this year were entertainers; while in the Irish list, seven were entertainers, and 10 political figures. Just four of the top 10 women and three of the top ten men chosen by Irish voters are Irish.

US first lady Melania Trump appeared on the list for the first time, coming in 19th internationally, and 18th in the Irish poll. Two members of the royal family appeared in the Irish list, with the queen in sixth place, and Kate Middleton, the Duchess of Cambridge, in 15th.

The full Irish and international lists are available at yougov.co.uk