Family Fortunes: They identified relationships that otherwise would have been lost 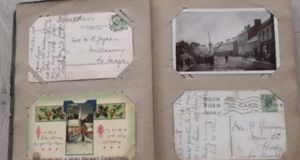 When researching my family history over recent years, a collection of handwritten postcards, many dating from more than a century ago, was pivotal in directing my searches and identifying key relationships that otherwise would have been lost to us for ever.

My aunt Vera, having taught for a period on Achillbeg Island in her native Mayo, went to live on the Isle of Man in the late 1950s. She was the last surviving member of our father’s family when my brother, Tom, finding her gravely ill, brought her home, where she died 45 years ago. Among her possessions was a postcards album, which turned out to be the most beautiful and valuable legacy she could have gifted us. My sister Kate, realising this at the time, became its guardian.

The album contains 60 signed cards, a mix of black and white and colour, even in 1912. The senders are adults, children, teenagers, relatives, school friends and are mainly from Ireland and England. Their dates range from 1908 to the 1940s, with the first being from our grandfather in west Africa in 1908, while another was written by our grandmother on honeymoon in 1913.

Glimpses of Irish life at the time filter through them. One author warns in the lead-up to the Great Lockout of 1913 “to be careful, as Dublin is punctured”, while several of the later ones have the “Rialtas Sealadach na hÉireann 1922” stamp on them. A 1938 one to Vera from her father, Michael, lamented the poor roads in Donegal.

There is a humanity and feel from the cards – the writing styles, the humour and the greetings – that cannot be gleaned from the birth, marriage and census records alone, and which is absent from modern electronic messages.

The postcards also opened a door to relatives we didn’t even know existed. These included John O’Gorman, who separately discovered us, and who grew up in Dublin but now lives with his family in Hamilton, Canada. Meeting for the first time in 2010, he was amused and moved when reading an original postcard that his father, Malachy, had written as a young teenager and posted in 1913 from his home in Armagh, to his aunt Liz, our grandmother, in Mayo.

So, I say, long live the humble postcard, because, rather than a thing of the past, for us, it proved a wonderful gateway to it.